Trump's MAGA Reality Show Is Coming To An End It was a surprising run.

Trump managed (barely) to stay in office for his full term. His greatest reality show, however, is in trouble.

COVID-19 is closing the curtains on his presidential stage by following him around like a faithful dog...with rabies.

After denying how deadly, and prevalent, the pandemic is for eight months, it caught up to his fat ass...and bit him!

It's hard to have sympathy for such a deeply flawed human being who is himself unable to express any compassion or empathy.

Moving on, the Trump disinformation campaign is slogging along in quicksand as conflicting reports about their supreme leader's health trickle in from Walter Reed Hospital where he's taking a vacation...oops! ... where he's valiantly fighting the deadly corona bug and kicking it's ass like no other corona patient has ever done...

No one knows what to believe regarding Trump's health. The sloppy efforts at making him look like superman bounding over super spreader events, is comical... and sad.

Reality has caught him with Don the Con. 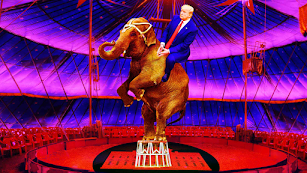 I think most Americans can see this, and would prefer to going back to the real world using science to combat COVID-19.

That means wearing masks and not pretending we've defeated the virus that's currently raging in over 32 states.

That means not lying about testing and data to hide the reality of the mounting causalities in our nation.

For the sake of our national health and democracy itself, we need Joe Biden to be the next president.

If you haven't registered to vote yet, please do. Your vote counts.

Quote for the Day: "The more real you get the more unreal the world gets." -John Lennon