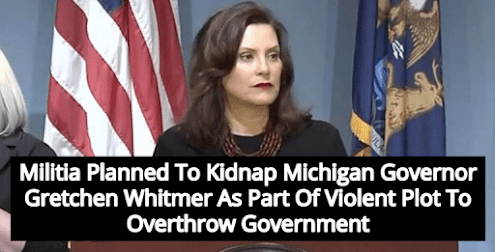 The fruits of Trump's dangerous rhetoric are already on display three weeks before election day.

Yesterday, the FBI and Michigan authorities rounded up 13 Michigan militia (Wolverines) members who were planning to kidnap Gov. Gretchen Whitmer, and start a civil war.

It's actually come to this.

When Trump told the Proud Boys - an extremist paramilitary group - to "Stand Down - and -Stand By," every militia and antigovernment group in America took that as a signal.

It was not a dog whistle. It was more like a command to go forward as the election draws near and cause chaos at the polls.

Forty years ago the RNC was barred from the polls for voter intimidation, but that ban expired this year. It couldn't have come at a worse time.

When FBI director Wray announced that White Supremacist's and militia groups were the biggest domestic threat in America last month, Trump publicly contradicted him and said it was left wing agitator's who were the problem.

That was a lie. The proof is here that pro-gun extremist groups and militias are actively working on undermining the elections...and they want to start a civil war.

The good news is several states are holding drills, running through worst-case scenarios, setting up command centers to improve coordination on reports of violence and voter intimidation, and issuing public warnings that any crime that threatens the sanctity of a Nov. 3 vote will not be tolerated.

The bad news is most states aren't reporting coordinated plans to address violence from militias during the voting process. Secretary's of States have implied there will be federal help in protecting the polls without revealing any detailed plans.

The sad news is this shouldn't be happening at all. These violent threats should not be threatening the very core of our democracy - the right to vote.

Trump opened a Pandora's Box of political chaos when he refused to call out these groups throughout his presidency.

Unfortunately now the American public is paying the price to defend freedom from a morally bankrupt wannabe dictator.

Quote for the Day: "Your silence will not protect you." -Audre Lorde