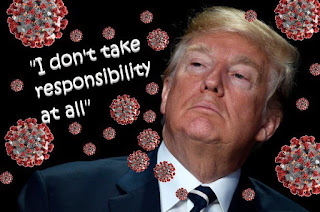 I'm still not use to every day seeming like a chapter from a fictional novel.

Yesterday, Trump told his minions to ignore a stimulus program for Americans, and instead to concentrate on getting "his" judge confirmed.

Stocks plummeted after investors realized there would be no stimulus program until after the election.

In the middle of a surging pandemic Trump has once again turned his back on the public to push for what he thinks will save his election. The confirmation of a supreme court judge.

Despite a strong warning yesterday from Fed chair Jerome Powell that the nation faces an "economic tragedy" if America can't control the coronavirus, Trump is plowing recklessly ahead to save his fat ass on Nov.3rd.

The fact is, the president of the United States is homicidally negligent for not following CDC guidelines and other professional healthcare experts recommendations to protect the country.

The White House is already a cesspool of COVID-19, as staffers and aides are coming down with the virus every day.

Letting a crazed Trump - who has not yet recovered from the virus he scorns, and who is having bad reactions to the steroids the doctors are giving him - run around the West Wing (instead of staying at Walter Reed hospital) is like turning Typhoid Mary loose in a packed NFL stadium.

No one has the balls to stand up to this rapidly deteriorating wannabe dictator. The doctors, the generals, and other staff lie routinely. Or, they resign, and write tell-all books.

Tonight Vice President Pence and Kamala Harris are going to debate before a national audience.

I fully expect it to be a stark contrast between fiction and fact. Pence is on Trump's crazy train to political oblivion.

Harris is a skilled interrogator whose going to verbally fillet Pence's pathetic stand against reality.

There's so much going on today that I'm not even going to try and report all of the stories that deserve attention.

I don't have the space, and I'm reasonably sure that you have better things to do with your day. Thanks for stopping by.

Quote for the Day: "The routine dulls the terror." -Maaza Mengiste