Stay Calm: Don't Play Trump's Game and Give Up Now 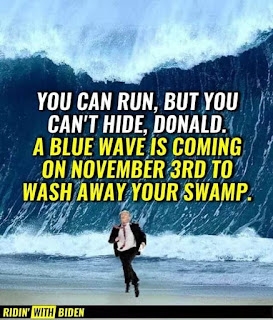 Election experts and lawyers saw it coming for months.

But what really worried them was Trump's assault against the United States Postal Service.

With 30-days to go before election day, Trump has managed to create voter confusion throughout the nation. States are fighting off Trump's attempts to slow down the USPS. Striking back, two federal judges ordered state ballots to be prioritized in November.

This insidious game is going to greater links every day, reflecting Trump's desperation.

When FBI Director Wray testified there was no evidence of mass mail fraud or cheating anywhere in America, Trump exploded.

His chief of staff (and professional ass wipe) Mark Meadows mocked Wray saying he couldn't find emails in his own FBI, let alone figure out whether there's any kind of voter fraud. It amazes me how low this idiot will go.

His complete lack of respect is par for the course for Trump lackeys. Speaking of lackeys, Trump had Barr look into an alleged mail fraud case based upon a suspicious circumstance where nine military ballots were found discarded in a northeastern Pennsylvania county.

It was apparent he was hoping for a major scandal but was sorely disappointed to hear the ballots were actually "incorrectly" tossed by as temporary seasonal independent contractor who started work sorting mail at the Elections Bureau. He threw out a small number of military and overseas ballots.

The county elections director found out what happened two days later, and had all the trash from the three-day period "placed in a dumpster and secured."  For the record, the temp lost his job.

The distractions don't stop there. Trump has thrown out the best scientists in the country and is telling America to ignore their expert advise and to just go about their business while the pandemic kills more than 1,000 Americans daily.

Meanwhile he's shoving through a confirmation for a new Supreme Court justice before election day despite the majority of Americans (71 percent) who think the winner of the election should make that important pick.

There's more distractions on the way. But, we can't let them take our eyes off the prize... a massive blue wave drowning out Trump and his minions.

It'll cleanse our government, restore civility, sanity, traditions, broken laws, and the rest of the damage Trump's toxic regime has wrought upon this nation.

Quote for the Day: "There's a difference between playing and playing games. The former is an act of joy, the latter-an act." -Vera Nazarian