Debate Analysis: The Most Disgusting and Embarrassing Moment in American History 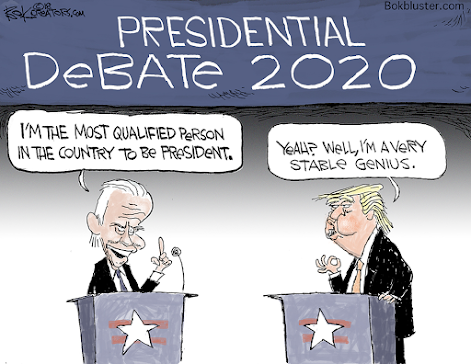 There's no other way to put it. Trump went off the rails within moments of the first question. It was like watching a kindergartener debate with an adult.

What was supposed to be a debate was nothing more than a shouting match with Trump ignoring the rules of the debate his side had agreed upon.

Watching Trump's orange makeup glisten under the hot lights highlighted the impression of a mad clown as he contorted his face in expressions of rage and constantly interrupted Biden.

There was no attempt to address any real issues on Trump's part. Instead he practiced being an asshole with Chris Christie's help prior to the debate.

Last night was the super bowl of politics for Americans...and the world. It was also deeply embarrassing to watch. Our allies cringed. Our enemies celebrated. Our standing in the world community took another hit.

What all the viewers saw was a democracy in crisis. The polarization and division in this country was laid bare for all to see. It was obvious the incumbent president was crazy with desperation because he knows he's losing in all of the polls.

When the debacle finally came to a close one of the first questions to come up was, should the other two debates be canceled? The idea of seeing a repeat of last night was a popular concern.

I think they should go on however. People need to see Trump outside his protective bubble to understand how deeply stupid and evil the man is.

Quote for the Day: "There is one thing that has disappeared, not just from the U.S. but from the entire world, is the idea of ever being embarrassed by anything." -Fran Lebowitz