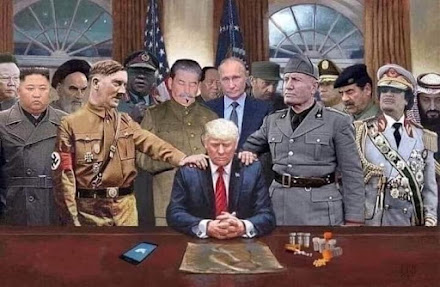 Trump's most fervent dream is to be among the pantheon of former and current world dictators. He's counting on qualifying this November.

If you are living in America today, you're facing the biggest crisis to ever happen to the republic. America's fate will be decided on November 3rd... or not!

The founders of this country are turning over in their graves wondering how one con man can come so close to destroying everything they helped create - the United States of America. Equality for all. Justice for all. And, above all, making sure the nation never has a king (the equivalent of a dictator for life).

At this point in Trump's presidency, he feels empowered to violate laws and rules with impunity. No one has been able to stop him since he was impeached for seeking foreign help in an effort to discredit his political opponent Joe Biden.

Trump didn't pull off this extraordinary coup against our democratic system alone. His enablers in the Republican-controlled Senate are complicit. Without those GOP senators help, we wouldn't be wondering if there's going to be a peaceful transition of power right now.

Because of a spineless senator majority, Americans are wondering if their mail-in votes will be counted. Republican propaganda and voter suppression efforts have caused confusion among voters in many states. With Trump mega donor Postmaster DeJoy in charge, the USPS (and Congress) has been fighting against efforts to slow down the system before election day.

This kind of blatant obstruction of the upcoming election tells me that Trump is confident he's going to get away with his power grab. As long as the jellyfish in the senate stick together he has a slim chance of doing just that.

It's not enough to just win this election.

Democrats have to turn out at the polls, and the mail, in historic numbers. The landslide has to be so apparent in the first 48 hours it'll defuse the avalanche of lawsuits GOP operatives are going to launch. Trump has made it clear he's not going to accept Biden's win, possibly setting the stage for the ugliest court fights ever witnessed in our judicial systems.

Democracy is at stake. So are lives. American's are living during a pandemic without leadership. Instead, we have a corrupt president whose only goal is to get re-elected. His disbelief in science, and safety recommendations from the USAs most prestigious healthcare professionals, make him more dangerous.

Freedom in America faces its biggest challenge yet. Not from an outside enemy, but from within by a malicious narcissist and sociopath.

The FBI and the Cyber and Infrastructure Security Agency are putting out public messages urging the public not to panic if they hear about election hacking. The larger goal is to explain why voters shouldn't believe disinformation about vote-stealing hacks if they see it.

We've never encountered a president who wouldn't agree to a peaceful transition of power. We've never had a Congress with a bigger pack of ideological cowards who have repeatedly broken their oaths to defend Trump's predations on our Constitution.

The key to recovery is Americans turning out to vote in numbers never seen before. I'm talking such a powerful mandate that Trump's lies will shrivel in this winter of our discontent.