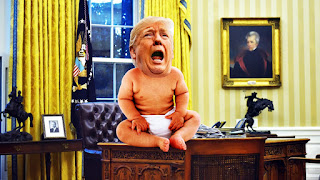 Back in 2018 Stephen Colbert came up with a funny book about Trump that helped raise funds for disaster victims of Hurricane Florence.

The title was "Whose Boat is this boat?" It was comprised of Trump quotes and Colbert boasted it was "perfect for young readers and presidents."

The book's publisher, Simon and Schuster, put out a press release that really cracked me up; "Research suggests this will be the first children's book ever published that demonstrates what not to say after a natural disaster."

Flashback to the present.

Trump has upped the odds from being befuddled by a natural disaster. He's currently dividing up the country into blue states and red states. It's his version of the Civil War and his mindless minions are buying in.

In his alternate reality Trump has been carving up the US into sections that will vote for him. Race is a major factor in the process as he tries to scare white suburban women into voting for him by claiming "coloreds" will move into their neighborhoods and rape and pillage them.

It gets even simpler. Trump's white states, that can also be Confederacy gray, can be counted on to follow him off a slippery ramp to hell. Black states are bad because minorities are plentiful and they don't like Trump. But Trump's dialogue about red and blue states is particularly menacing.

It transforms two political parties - Democrats and Republicans - into active combatants that are more concerned with their ideologies than the wealth or health of the American people. Transforming cities into battlegrounds where protestors on both side of the spectrum endlessly attack each other is crippling our nation's ability to survive these chaotic times, and cling to democracy in a united nation.

Somewhere in the Oval Office as I write this, Trump has wooden building blocks with states names and colors on them.

It gets hard for even his own staff to watch him play with those blocks...sometimes throwing them across the room in a tantrum, and at other times stacking them up as high as he can before they fall. Squeals of delight usually ensure when that happens.

Trump's minions, one and all, are happy to see him build a wall. Building blocks in the Oval Office are fine, or a few miles of real wall somewhere along the southern border...it doesn't matter. It's all about entertaining Donny...the man child.

Quote for the Day: "Some people's immaturity is intensified by their stupidity." -Mokokoma Mokhonoana