Bleeding Eyes in Fiction and Reality!

I didn’t know vampires bled from their eyes when they cried until I watched “True Blood” on HBO. It was messy to watch, that’s for sure.

I have to admit I thought the idea was kinda silly, but who cares right? It’s was just fiction. There’s no real vampires. But when I discovered an alarming true story about a man bleeding from his eyes without warning it shocked me!

For decades I’ve heard stories of religious statues of saints or Jesus Christ mysteriously bleeding from their eyes. It was too weird. The fact that there’s actually a condition called haemolacria (Bleeding from the eyes) and scientists have been aware of it for years freaks me out. 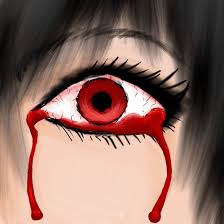 You really want to know what blows my mind regarding this whole topic? The people who have been medically documented with haemolacria ALL come from one place – Tennessee. Don’t ask me why. It seems no one knows the answer.

I really feel sorry for the guy in this article. His condition is making life hell for him. Read his story:

A young man from Tennessee is living with an alarming medical condition — without warning, he begins to bleed from his eyes. And some of the best doctors in the country are completely stumped by his ailment.

What's more confounding is that the condition is very rare, but some of the only other people known to bleed from the eyes — a condition called haemolacria — are also from Tennessee.

At age 22, Michael Spann was walking down the stairs of his home in Antioch, Tenn., when he was gripped by an extremely painful headache. "I felt like I got hit in the head with a sledgehammer," he told the Tennessean. Moments later, Spann realized that blood was trickling from his eyes, nose and mouth.

The bleeding and headaches became a daily occurrence for Spann; now, about seven years later, they happen only once or twice a week. Though he's hampered by a lack of health insurance, doctors in Tennessee and at the Cleveland Clinic performed an exhaustive series of tests, but were unable to pinpoint a cause or recommend a treatment, according to news reports.

The phenomenon of haemolacria has puzzled doctors for centuries. In the 16th century, Italian physician Antonio Brassavola described a nun who, instead of menstruating, would bleed from her eyes and ears each month. In 1581, Flemish doctor Rembert Dodoens examined a 16-year-old girl "who discharged her flow throughout the eyes, as drops of bloody tears, instead of through the uterus," according to a 2011 report in the journal The Ocular Surface. (Full story here)