Why did the CDC feel the need to tell the public zombies don’t really exist? 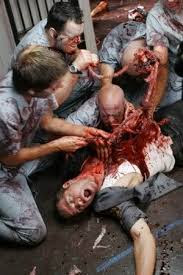 Why did the Center for Disease Control and Prevention decide to issue a release assuring the public zombies don’t exist? They could have also added, the Boogey Man, Vampires, and Werewolves, but chose not to.

I can only speculate, but lately cannibalism stories seem to prove to some people that there are zombies. The #2 trending spot on Google is “zombie apocalypse.” Zombies have already invaded popular horror movies. Now they’re lurching around in our society seeking a spot alongside Vampires and other trending monsters.

“A spate of bizarre acts of cannibalism in the last week have many people wondering whether to be afraid for their own flesh. The populous' collective curiosity has even driven "zombie apocalypse" up to the No. 2 spot on Google's list of trending search terms. But don't worry: according to government scientists, the zombies are not coming for you.

The flesh-eating living dead don't actually exist, said a spokesman for the Centers for Disease Control and Prevention (CDC). "CDC does not know of a virus or condition that would reanimate the dead (or one that would present zombie-like symptoms)," agency spokesman David Daigle told The Huffington Post.”