As It Stands: What happened to the real meaning of Memorial Day? 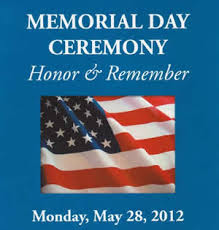 By Dave Stancliff/For The Times-Standard
Tomorrow is Memorial Day. I’d like to talk about how it has been transformed into something else, and what it means to most Americans.
Barbecues and beer. Getting into vehicles and traveling for fun. A three-day weekend. A time to go to the beach and burn ourselves to a crisp. A day off from school. A break in the work week. All of these activities and more go through the average American’s head regarding a holiday originally designed to mourn our military dead.
What a bizarre twist for Memorial Day, originally called Decoration Day. Once it was a day of remembrance for those who died in our nation's service. Now, it’s a time to hope that gas prices don’t get too high for travel.
While Waterloo N.Y. was officially declared the birthplace of Memorial Day by President Lyndon Johnson in May 1966, it's difficult to prove the origins of the day. Historians think the day had many separate beginnings 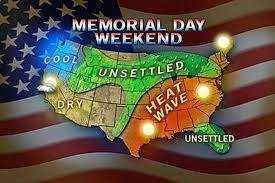 as towns held spontaneous gatherings to honor the Civil War dead in the 1860s.

Memorial Day was officially proclaimed on May 5th 1868 by General John Logan, national commander of the Grand Army of the Republic, in his General Order No. 11, and was first observed on May 30th, 1868. Flowers were placed on the graves of Union and Confederate soldiers at Arlington National Cemetery.
It’s not important what was the very first town to honor the war dead. It is important  that Memorial Day was established. Memorial Day is not about division. It is about reconciliation; it is about coming together to honor those who gave their all. 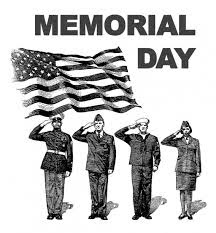 Were you aware of this history? Are your children aware of this history?  Did you know the first state to officially recognize the holiday was New York in 1873? By 1890 it was recognized by all the northern states. The South refused to acknowledge the day, honoring their dead on separate days until after World War I when the holiday changed from honoring those who died in the Civil War to honoring Americans who died fighting in all of our wars.
Traditional observance of Memorial Day has faded over the years. Many Americans  have forgotten its meaning and traditions. At many cemeteries, the graves of the fallen are increasingly ignored, neglected. Most people no longer remember to fly the flag at half-mast for the day.
While there are towns and cities that still hold Memorial Day parades, many have not held a parade in decades. Some people think the day is for honoring any and all dead, not just those fallen in service to our country. What happened? How did this day turn into a free-for-all three-day vacation? Many feel when Congress made the day into a three-day weekend with the National Holiday Act of 1971, it made it easier for people to be distracted from the spirit and meaning of the day.’ 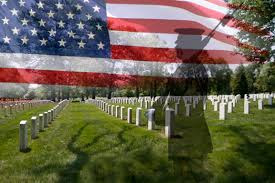 As the VFW stated in its 2002 Memorial Day address: "Changing the date merely to create three-day weekends has undermined the very meaning of the day. No doubt, this has contributed greatly to the general public's nonchalant observance of Memorial Day."
To help re-educate and remind Americans of the true meaning of Memorial Day, the “National Moment of Remembrance" resolution was passed in Dec. 2000 which asks that at 3 p.m. local time, all Americans "Voluntarily and informally observe in their own way a moment of remembrance and respect, pausing from whatever they are doing for a moment of silence or listening to Taps." 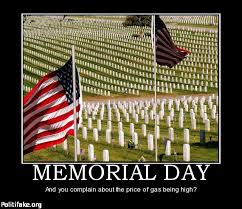 What we need is a full return to the original day of observance. On January 19, 1999 Senator Inouye introduced bill S 189 which proposed to restore the traditional day of observance of Memorial Day to May 30th instead of "the last Monday in May." To date, there have been no further developments on the bill. Go to Http://www.usmemorialday.org/act.html if you think that we should restore the traditional day of observance.
Meanwhile, if someone wants to start a new three-day holiday at the end of May, I say go for it. Call it “Barbecue Day and Travel Too,” a day of escape from drudgery.
As It Stands, the true meaning of Memorial Day is rapidly becoming a trivia question!

Well done Dave, I have shared this story with many of my friends.