When the Apocalypse strikes: ‘New Agers’ wait for Aliens to come out of mountain in France this December

At some point in our personal travels we are all confronted with people who believe the end is near and we’re all going to die or disappear.

I thought all the hippies shed the sixties and mainstreamed. But apparently there is a new age of hippies who aren’t all about peace and love. More like death and trips to new worlds or “cycles.” They’re gathering in a little village in France as you read this. I really think the Mayan Calendar thing isn’t as cool as these aliens coming out of mountains and whisking us all off to space. 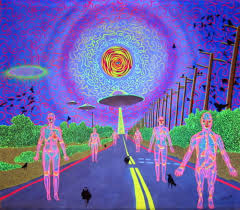 There’s other visionaries with different dates for our destruction this year, but they don’t seem to have large followings. For some reason the French locals are expecting up to 100,000 hippies to show up so they can be captured by aliens in December. The upside is it really gives tourism a boost during a tough economy in France.

Straight from the news:

“BUGARACH, France, (UPI) -- Hundreds of hippies have made their way to the French village of Bugarach to await aliens they say will emerge from inside a mountain when apocalypse strikes.

About 200 New Age believers have taken up residency at the base of the Pic de Bugarach mountain, The Independent reported Sunday. Upward of 100,000 people are expected to visit the mountain before Dec. 21 when the group believes the world will come to an end. Already this year, about 20,000 people have made their way to the peak -- about twice the number of hikers all of last year.

The group believes that on its date for the apocalypse, aliens will come out of the mountain and take with them any nearby humans.

"The apocalypse we believe in is the end of a certain world and the beginning of another," said a man called Jean, who has lived in a wooded area near the forest for several years.

"A new spiritual world. The year 2012 is the end of a cycle of suffering. Bugarach is one of the major chakras [energy centers] of the Earth, a place devoted to welcoming the energies of tomorrow."

Bugarach Mayor Jean-Pierre Delord has alerted national authorities of the situation in fear of a mass suicide.”