Trayvon Martin tragedy: now his death is being marketed 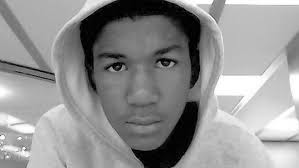 I often wonder how low some people can go when it comes to making money off of other’s misfortunes. The Trayvon Martin story is tragic for a number of reasons, but there’s one in

particular that is pissing me off!

His own mother, Sybrina Fulton, filed to trademark “Justice for Trayvon,” on March 21st. She wants to use the phrase in connection with CDs, DVDs, and other digital products. She may be the first to file, but there’s someone else who filed days later on March 23rd:

Marcus Singletary, a 36-year-old musician, is seeking to cash in on the phrase, “Justice for Trayvon.” His United States Patent and Trademark Office filing notes that he wants to solely use the phrase for “Hooded sweatshirts.”

He submitted his application online and it cost $275. It’s excerpted here. A rock guitarist, he is pictured right in a photo off a 2008 album cover.

In my mind’s eye, I see jackals and hyenas chewing on Martin’s memory like ghouls.