Don’t ever say we fought for Democracy in Iraqi: look at the legacy we left behind 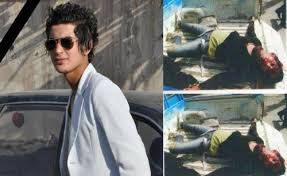 Only damn fools thought we were fighting for Freedom and Democracy in oil-rich Iraq for a decade. Show me one positive thing that came out of pouring billions of tax-payer dollars into that dump? Soldiers on both sides, and innocent civilians died to accomplish what? Have we restored “human rights” after kicking Saddam Hussein out? Hell no. Get real. photo source for Iraqi Youth who died for dressing like an Emo.

Let’s take a look at some recent news from Iraq to help determine what’s changed:

“At least 14 youths have been stoned to death in Baghdad in the past three weeks in what appears to be a campaign by Shiite militants against youths wearing Western-style "emo" clothes and haircuts, security and hospital sources say.” source

Sure sounds like the good old days before we invaded the country. There was nothing near a fair trial for those murdered youths who dared to wear something other than the silly assed robes the hardliners wear.

“The killings have taken place since Iraq's interior ministry drew attention to the "emo" subculture last month, labeling it "Satanism" and ordering a community police force to stamp it out.” source

I’m so impressed with the legacy we left behind. According to Arab news agencies, the number of youths executed because of their fashion choice, is much higher than the confirmed report of 14.

What’s that phrase that goes something like, “The old boss, is the new boss.”???? To add salt to the wounds, billions of American tax dollars have disappeared, and no one seems to know where that mountain of greenbacks is.

And so it goes: Vietnam, Iraq, and Afghanistan - whose legacy from our involvement has yet to be determined. I feel safe to say the legacy we leave behind will be less than the dust in the winds. Just like the other countries we conquered in the name of Freedom and Democracy.

As It Stands, there are no winners in wars waging ideologies.

Posted by ImBlogCrazy at 6:04 PM