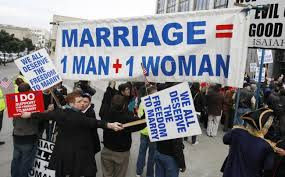 Gov. Chris Gregoire has signed into law a bill that legalizes gay marriage in Washington state, making it the nation's seventh to allow gay and lesbian couples to wed. Before she even put pen to paper anti-homosexual groups were girding for war. A holy war in their narrow minds. But who are THEY in this case?

“They” are members of organizations like the Family Policy Institute of Washington who are already organizing a campaign to overturn the new law that is set to go into effect on June 7th. Check out their web site. Look at the smiling, fresh faces that think Jesus hates homosexuals and denies them the key to Heaven.

God and Politics have become a quasi-religion where stiff-necked religious hypocrites judge everyone that doesn’t believe as “They” do. Read the “alerts” and calls for donations on FLI’s website, which is a thinly disguised effort to marginalize their fellow Americans in the name of God and man-made moral values that “They” don’t even keep. 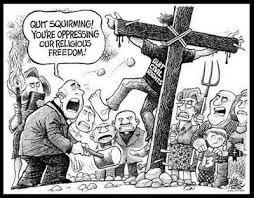 “They” don’t think all Americans should have the same opportunities. Even when it comes to their own love life. “They” can’t seem to respect anyone that doesn’t believe the way “They” do. In conclusion; “They” have a different view of the Constitution that assures us all equality. “They” are the reason why more people are leaving churches today.

“They” are religious extremists, and one of their many missions is to keep same-sex marriage illegal…because they say, the Bible says it so.

As It Stands, “They” won’t give up trying to take other’s rights away because “They” are heavily funded, and on a crusade to clean up Amerika.

Posted by ImBlogCrazy at 4:00 PM