As It Stands: Why Nigeria became the scam capital of the world 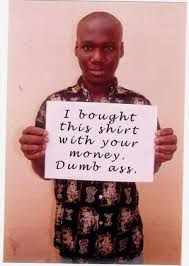 By Dave Stancliff/for The Times-Standard
If you’ve ever received an e-mail from someone asking you to help them claim a fortune, chances are that someone was in Nigeria. They hoped you were greedy and stupid enough to go along with their bogus offer.

How did this African nation become scam central for the entire planet? I looked into that question and here’s what I found:
Not all scams originate in Nigeria. They just seem to be more persistent there. Nigeria is the most populous country in Africa (158,423,180 as of 2010). International population estimates say 65 percent of Nigeria’s citizens live on less than $1 a day. If that isn’t incentive for crime, nothing is. It’s a “short con”  that can be carried out cheaply with limited Internet access.
The Nigerian Scam, or the “419 Advanced Fee Fraud,” as it’s known to the Internet savy, came from the Nigerian criminal code for such a crime (419), according to Wikipedia.

The modern 419 scam originated in the early 1980s as the oil-based Nigerian economy declined. During this chaotic time, several unemployed university students first used this scam, spawned from shady deals in the Nigerian oil sector.
It’s very simplicity, someone willing to share part of a fortune for a large sum of money given by the victim, has made it a success.
Businessmen in the west had targets painted on their check books. The scam was so successful it grew wings and flew around the world. Greed, being what it is, assured these scammers of a long haul with a short scam.
The spread of e-mail and easy access to email-harvesting software significantly lowered the cost of sending scam messages. According to Insa Nolte, a lecturer of University of Birmingham's African Studies Department, "The availability of e-mail helped to transform a local form of fraud into one of Nigeria's most important export industries."

During the 1900s, the Nigerian Scam spurred imitations from other locations in Africa, Philippines, Malaysia, Russia, Australia, Canada, United Kingdom, and the United States.
Here we are decades later and just about every American who owns a computer has been contacted by someone using the Nigerian Scam. The thing that gets me is the bad English used in the scam letters. It seems to me they should take more notice of such an important detail.
Then again, it’s a formula that has worked for decades and scammers might be nervous about messing with success. The fact that practically any person, educated or not, can make money with very little effort using the Nigerian Scam, assures it’s continuance.
For the record, the Nigerian Scam, also known as an “Advance-fee fraud” is similar to a much older scam known as the Spanish Prisoner Scam in which the trickster told the victim that a rich prisoner promised to share treasure with the victim in exchange for money to bribe prison guards.
An older version of this scam existed by the end of 18th century, and is called "the Letter From Jerusalem" by Eugène François Vidocq, in his memoirs. I point this out not only to show the evolution of the Nigerian Scam, but to prove that greed has always opened doors for those willing to use it for their personal advantage. 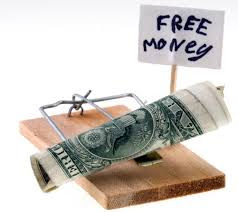 I think it’s only fair to point out that not all Nigerians are criminals and the honest ones are probably fed up with the reputation their country has because of the scammers.
Disclaimer: this column is not a master’s thesis on why Nigeria is “scam central” in today’s world. I’ve only outlined why I think it is, based upon the facts presented. I have nothing against Nigerians. I do have an insatiable desire to explore why things are the way they are.
If you’d like to know more about the Nigerian Scam and others similar to it, I recommend going to Scambaiter at http://www.419eater.com/  There’s a lot of good current information available there.
As It Stands, knowledge is power, and the more articles you read warning about internet scams, the safer you and your bank account will be.

Posted by ImBlogCrazy at 9:00 AM