‘Not in my State’ : Pig Eyes Christie vetos same-sex marriage in NJ 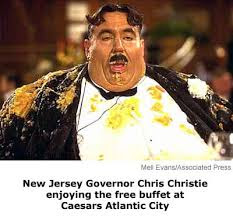 Take a look at the face of intolerance. Not very pretty.

Pig Eyes gets his way this time and tells the majority it doesn’t matter what they want. Once again, he prevents marriage equality for gays and lesbians in the state of New Jersey.

I know his intolerance gives him major points with some Tea Party groups and right wing extremists, but in the end…this is America and there’s no place for marginalizing people because of their sexual orientation. It’s just a matter of time before same-sex marriage is legal there.

Posted by ImBlogCrazy at 6:46 PM