Talk about get up and go: coffee-fueled car breaks record 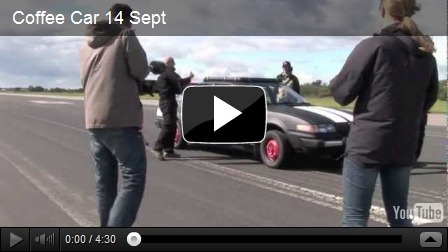 Coffee fuels millions of human brains every day. Now, spent coffee grounds have set a land-speed record as a fuel for cars. That's right; a coffee-fueled car built by an enterprising team of British engineers recently zipped into the Guinness World Records with a top speed of 77.5 miles per hour and an average of 66.5 miles per hour.

The Coffee Car effort is led by Martin Bacon and a team of Teasedale Conservation Volunteers who were inspired after realizing that coffee shops produce tons of grounds that could be used to get something else going. The Coffee Car set the new record for a car powered by organic waste. The coveted honor was previously held by the Beaver XR7, a wood pellet burning car built by Beaver Energy, which averaged 47 miles per hour.

To fuel the car on coffee, Bacon's team collects spent coffee grounds from shops around town, dries them out and turns them into pellets that are cooked up in a gasifier designed to fit within the body of a heavily modified Rover SD1. (More than 550 pounds of excess weight have been removed to make room for the heavy gasifier.) The gasifer burns wood and the coffee pellets at super high temperatures, which creates a synthetic gas of carbon dioxide, hydrogen, and methane capable of powering an internal combustion engine, CNET explains.

The record-setting car was developed in cooperation with the BBC One show Bang Goes the Theory and will be at Bang Live during the Manchester Science Festival Oct. 22-23.