Clothes from milk, Sausage the riot dog, and Snappy the orange gator

What a day! A break in the weather. Grab a cup of coffee and join me for a few quick reads to start your day. We live in a wacky world and here’s proof:

A young fashion designer from the German city of Hanover is revolutionizing high fashion by designing clothes with a staple she can find in her fridge -- milk. Anke Domaske, 28, has developed a fabric called QMilch made from high concentrations of the milk protein casein -- the first man-made fibre produced entirely without chemicals. "It feels like silk and it doesn't smell -- you can wash it just like anything else," Domaske told Reuters.

There he is, yelping with delight as the youths start hurling chunks of paving stones, barking his admonition at a cordon of cops fending off petrol bombs, sneezing as he scampers through the tear gas.

Meet Sausage the riot dog, an amiable ginger mongrel resident of Syntagma Square in central Athens, who doesn't mind if you show up for a day of mayhem as long as he can join in.

Whenever there's a demonstration, Sausage is there, always taking the side of the protesters and cheerfully lending a sense of comic relief to the occasionally violent proceedings. It's made him a local celebrity. He's appeared on the front of just about every newspaper in Greece and wagged his tail on TV screens and websites around the world.

On Wednesday when state workers marched against government cuts, Sausage was in his usual spot at the front, egging on the crowd with a hearty "Gav!" (Greek for "Woof!"), tripping up baton-wielding officers as they charged down the steps. 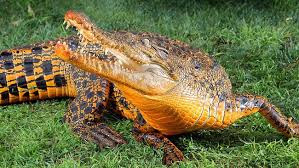 Kermit may find it hard to be green, but he might want to Snappy the crocodile before he starts feeling too sorry for himself.

Snappy, a resident of a wildlife park in Australia, decided to take a bite out of his enclosure's water filter. Unfortunately for Snappy, the water filter bit back: The ph levels from the damaged filter turned Snappy orange. Bright orange.

But all is not lost for the color-challenged croc: Snappy is expected to change back to his original green self soon.