Invasive Starlings, Signs of the Times, and ‘Text Neck’ from Mobile Phones 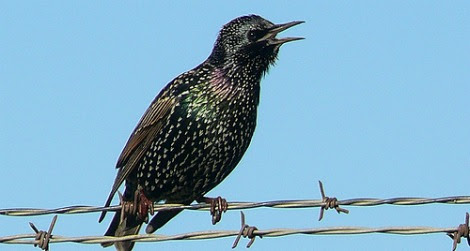 The birds are singing outside (not starlings however) and the sun is slowly stretching over the horizon. Another day in paradise. Don’t worry if you didn’t bring your coffee cup, I have extras and a hot pot of steaming joe ready to go. Are you ready to read?

The Invasive Species We Can Blame On Shakespeare

If you live in North America, you probably recognize European starlings, those little black birds with white polka dots that chirp and chatter and, in the winter, hang out in flocks of thousands. There are 200 million of these birds on the continent, and they can be found as far north as Alaska and as far south as Mexico. Numerous though they are, starlings are actually non-native invasive species. And we can blame Shakespeare for their arrival in America. Steven Marche explains in How Shakespeare Changed Everything:

On March 6, 1890, a New York pharmaceutical manufacturer name Eugene Schieffelin brought natural disaster into the heart of [New York City] completely without meaning to. Through the morning snow, which congealed at times to sleet, sixty starlings, imported at great expense from Europe, accompanied Schieffelin on the ride from his country house into Central Park—the noisy, dirty fulfillment of his plan to introduce every bird mentioned by Shakespeare into North America. Schieffelin loved Shakespeare and he loved birds….The American Acclimatization Society, to which he belonged, had released other avian species found in Shakespeare—the nightingales and skylarks more commonly mentioned in his plays and poems—but none had survived. There was no reason to believe that starlings would fare any better. Schieffelin opened the cages and released the birds into the new world, without the smallest notion of what he was unleashing. 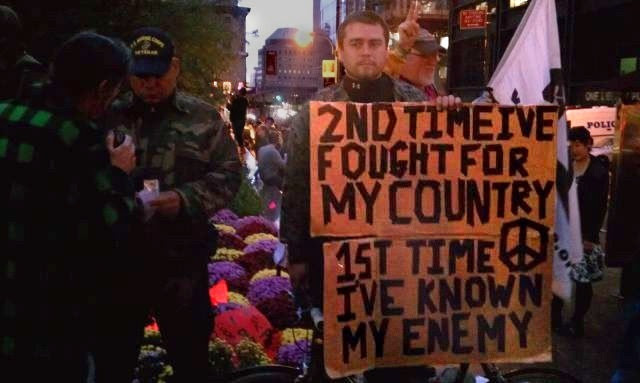 Signs of the Times

This is one of the most powerful images I've seen emerge from #occupywallstreet.

Not for the drama of the image, but for the devastating truths contained within this sign and the brave Marine holding it.

A new condition dubbed "text neck" is on the rise due to the amount of time people spend hunched over their mobile phone and tablet computer screens, chiropractors have warned. The affliction, caused by flexing the neck for extended periods of time, can be a forerunner of permanent arthritic damage if it goes without treatment. Cases of the repetitive strain injury are on the rise as smart phones and tablet computers such as the iPad become increasingly popular, experts said.

In severe cases the muscles can eventually adapt to fit the flexed position, making it painful to straighten the neck out properly. One chiropractor said her company had treated thousands of patients for the condition, which can also result in headaches and shoulder, arm and wrist pain. Rachael Lancaster, of Freedom Back Clinics in Leeds, said: "Text neck is caused by the neck being flexed for a prolonged period of time.