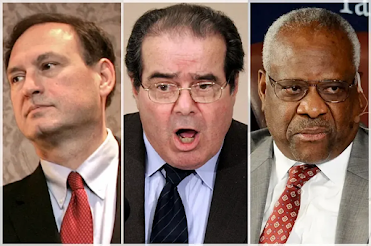 The foundation for the ruination of the reputation of the highest court in the land was laid by right-wing evangelicals years ago.

At least three Supreme Court justices have been discovered privately praying with leaders from Liberty Counsel, a right-wing ministry with a political agenda.

The decay began years ago when Robert Schenck, the founder of Faith in Action in the Nation's Capital, which was absorbed by Liberty Counsel in 2018, told Rolling Stone he prayed with the justices while with the organization.

Recently Peggy Nienaber, the executive director at Liberty Counsel, was caught bragging about praying with the justices the Monday after Roe was overturned, according to an Above the Law - article.

One day Nienaber was accidently recorded admitted the relationship she's had with the justices...

So, to recap Nienaber who's a religious zealot, has been praying with some of the justices inside the Supreme Court building. Her organization has had undue influence by bringing cases and arguments before the high court. Most recently they filed amicus brief on the Dobb's decision.

So far, the only justices' names that have been associated with Nienaber and the private prayer sessions are Alito, Scalia, and Thomas. It doesn't mean there's not more justices violating their oaths. We just haven't found out yet if there are.

The unimaginable has happened. The court is a toxic brew representing a minority of Americans in 2022.

This country's founders mistakenly thought that giving nine people unlimited judicial power and rendering them untouchable in our system of government was a good idea. Ouch!

I suspect those founders are turning over in their graves at what the Supreme Court has become now ... a sounding board for fascism.