A divine sip of wine is one way to worship God.

According to Christians "alcohol is a gift from God that makes life more joyous," but that over-indulgence leading to drunkenness is sinful or at least a vice.

Wine is very much part of holy services in Lutheranism, Roman Catholicism, Eastern Orthodoxy and Anglicanism. 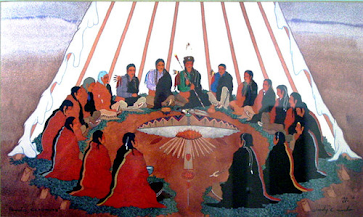 The Native American Church, also known as Peyotism and Peyote Religion is a native American religion that teaches a combination of traditional Christianity, with sacramental use of the entheogen peyote. The church was founded over a hundred years ago in Oklahoma.

"And God said, Let the earth bring forth grass, and the herb yielding seed..."

In many cultures and religions that predate the United States and Christianity, the cannabis plant has been used as a spiritual and religious sacrament.

Many religions have adopted cannabis from Hinduism to Rastafarianism to Christianity.

Just recently there's been the emergence of an entirely new religious philosophy: Cantheism:

In Christianity a member of the clergy blesses people with Holy Water, and it's used in baptism.

Holy Water is a natural symbol of purification and has been used by religious peoples as a means of removing uncleanness, either ritual or moral.

So, however you're celebrating this Sunday I hope it's a peaceful day.