What About a 'Stranger Things' Spinoff Based Upon American Politics? 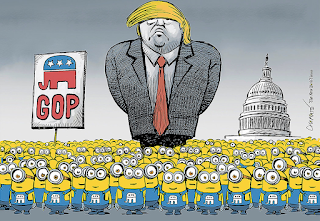 You're going to have to work with me on this one.

After the final season of Netflix's wildly popular Stranger Things the producers are talking about spinoffs.

I think that's a great idea and have a proposition for Upside Down Productions the producers of Stranger Things.

Make a TV series about a group of voting age individuals from San Francisco who are trying to find and destroy the source of evil in American politics.

The diverse group of men and women will have various superpowers that they use to probe the soft underbelly of corrupt political parties and expose their attacks against the republic.

As each episode peels back the political graft and constitutional violations a pattern begins to form until the group discover that an Upside-Down orange demon is behind a zombie army of Republicans set on destroying America.

The demon came to power on a platform of hate pushed by loyal minions willing to install an authoritarian state and worship him.

Our heroes will have to use all of the tricks in the book(s) to infiltrate the spreading slime that is threatening the electoral system and other government offices polluted by the demon's reach and hold them accountable.

The group is running against time to close the gash that the demon and his minions have opened up in our democracy allowing the monster-y dimension the Upside Down to gain entry.

We'll follow a closely bonded group of characters that will capture our hearts while watching their weekly struggles in saving American politics.

So. Just let me know when you're ready to use my spinoff suggestion. I've got some great ideas for characters. You know where to find me.