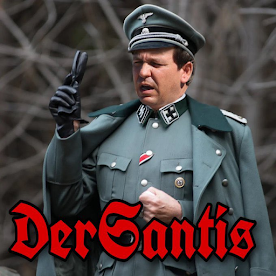 His latest attack on democracy is directed towards the universities who are daring to feature diverse curriculums and shunning hate groups who foment violence on campuses.

DeSantis' goal is to make Florida universities accept groups like the KKK and the Proud Boys who are known to threaten minorities and liberals. He wants them to have equal time in a perverted view of "intellectual diversity" that extreme right-wingers are pushing across the country.

This unprecedented project was tucked away in a bill the Republican-led legislature passed Tuesday.

So far, it looks like the survey responses won't be anonymous which is a red flag. That means professors and other university staff could be targeted, held back in their careers or even fired for their beliefs.

The bill's sponsor, state Sen. Ray Rodrigues claims faculty will not be promoted or fired based on their responses. If that were a fact, why doesn't the bill say there won't be repercussions?

The bill doesn't specify what the survey results will be used for, but DeSantis and Rodrigues suggested that the state could institute budget cuts if university students and staff do not respond in a satisfactory manner.

The survey's details haven't been released yet, but DeSantis said during a press conference that the purpose of the survey is to discover, "the extent to which competing ideas and perspectives are presented," and whether students "feel free to express beliefs and viewpoints on campus and in the classroom."

In other words, the universities are supposed to allow groups with dangerous philosophies to preach their hate and lies in classrooms and on campus without any recourse. Riots will become the new reality when the newly empowered trolls are sanctioned to intimidate and attack other students and staff.

Common sense be damned. DeSantis and the corrupt Republican party are on a mission to transform our democracy into an authoritarian state. And Florida is ground zero.