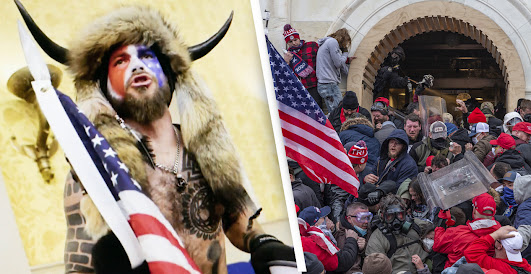 No more coddling the wannabe dictator squatting in the White House trying to overthrow our government.

Newspaper around the world reacted in horror with headlines like ANARCHY in America, and TRUMP SUPPORTERS DEFILE DEMOCRACY.

How bad was it?

The attack by Trump followers was a stunning display of insurrection. It was also the first time the U.S. Capitol had been overrun since the British attacked and burned the building in August of 1814, during the war of 1812.

Both Republicans and Democrat were exploring means of stopping any further damage by Trump by invoking the 25th Amendment, or impeachment last night.

It's still unclear how far that talks will go.

Maybe this time Senate Republicans will stand up to the sociopath who they should have indicted for abuse of power in February of 2020.

Early reports this morning say that four people died; one was shot after Trump supporters breached the Capitol Building, and the other three suffered "separate medical emergencies that resulted in death" connected to the riot.

More than 52 people have been arrested but the FBI is still searching for participants and asking the public to identify attackers. The FBI's digital experts spent the night watching surveillance videos to match faces with social media posts.

This morning there was a confirmation that pipe bombs were found at the headquarters for the DNC,RNC and grounds of the Capitol building.

While it was a dark day for America, Congress still did it's job and confirmed the electoral votes that made Joe Biden our next president.