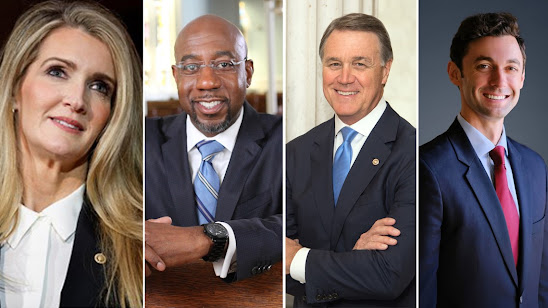 It's difficult to recall a more important special election in any state in recent history than the one happening in Georgia today.

The stakes couldn't be higher. If the two Democrats win they clench the Senate and Biden's chances of passing meaningful legislation are greatly enhanced.

If even one Republican wins, Democrats are stuck with Mitch McConnell for another years. Everyone knows what that means. He'll obstruct Biden's every move like he did with Obama.

The loser, in this case, would be Americans who are counting on seeing the direction of this country steered in the right direction.

Trump has been busy eviscerating Georgia election officials who wouldn't cheat and overturn the election he lost to Biden.

In his desperation Trump called Georgia's secretary of state, Brad Raffensperger, two days ago and threatened him if he didn't find enough votes to overturn the election in his favor.

As voters go to the polls today the newly-elected district attorney for Fulton County, Fani Willis, is opening an investigation into Trump's less than "perfect phone call."

Willis made history when she was elected the first female district attorney in Fulton County history.

It ought to be interesting to see if she shatters another political norm and ends up charging Trump for attempting to manipulate the state's presidential election results.

It would be poetic justice seeing a woman be the first to prosecute Trump the misogynist for breaking a law.