Open Treason: Trump is Trying to Unravel Democracy and Doesn't Care Whose Watching 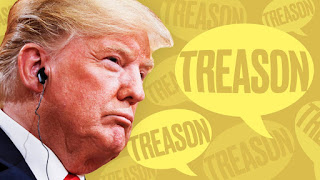 Reality is dawning on some Republicans, but it's been a long haul. Democrats are losing their patience waiting for Trump to wake up and admit he lost the election.

What we have here is an open season for treason as Trump misuses his office to try and steal an election he lost fair and square.

He believes he's above the law and has demonstrated that throughout the four years of his disastrous reign.

Sure he was impeached, but the Senate let him off the hook in a treasonous display of Trump over country.

Trump and his court clown Rudy Giuliani are busy spreading lies like manure about the election results in swing states.

Their no evidence-based accusations have fallen flatter than pancakes in the courts (over 30 kicked out and counting).

How much longer is Congress going to stand by and watch Trump set fires abroad and at home before taking some action to defend the country?

What's the breaking point where someone finally admits our wannabe emperor has no clothes (or sense)?

It's getting worse by the day.

"Having failed to make even a plausible case of widespread fraud or conspiracy before any court of law, Trump is now openly putting overt pressure on state and local officials to subvert the will of the people and the rule of law."

The consensus among the GOP is that Trump is getting revenge because he doesn't think the Democrats ever thought he was a real president.

In layman's terms, Donny is butt hurt and intends to throw tantrums until he's kicked out of the White House on Jan.20th, 2021.

Quote for the Day; "Your treason shall be your poison." - Noha Alaa El-Din