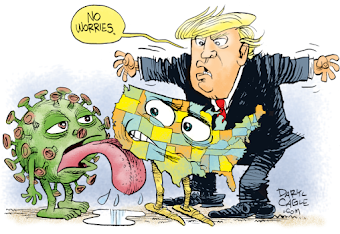 Thanks to Bob Woodward's book, Rage, we know that Trump checked out on the coronavirus in January when he thought it was going to hurt the economy.

For a while he pretended to be concerned about the pandemic and set up a Coronavirus Task Force to combat it.

He even appeared daily with health briefings (thinly disguised bullshit sessions) on the progress HE was making to save the country. 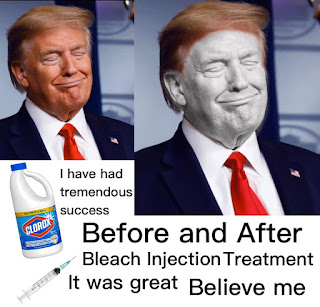 The briefings faded away when his advisors convinced him he needed to move on after recommending bleach injections to cure the virus.

When it became apparent that healthcare officials wouldn't pass on the false information Trump wanted he attacked them. Then shut them up. Then he hired a quack off of Fox News to head up the new farce force.

With the country consumed with a growing healthcare crisis spiraling out of control Trump turned ALL of his attention towards getting re-elected.

After losing the election he claimed it was rigged. He's still playing out his fantasies that would overturn the results of one of the safest elections ever held.

What bothers me is that it seems like no one can stop from him from purging the Pentagon and other government agencies of people he thinks are disloyal to him.

Worse, he's looking abroad to start trouble. Ordering troops to summarily come home from Afghanistan and Iraq was a reckless move that no one in the military, and the intelligence community, wanted to see happen.

Republicans in Congress are holding their breath waiting for reality to sink into Trump's tiny brain. They're afraid to acknowledge Joe Biden won because they fear Trump and his base.

The result was predictable. The nation's on hold while Trump bounces around in the White House bunker in a childish rage against reality.

Until January 20th rolls around the chaos will continue.

Quote for the Day; "I don't like losers." -Donald Trump