Where will Trumplicans Go After Administration Purge on Jan. 21st? 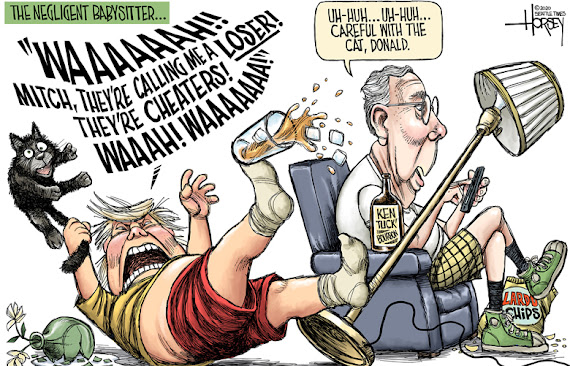 The cleansing is coming.

After thoroughly disinfecting and fumigating the White House in January when Trump's gone, there's going to be a lot of unemployed Trump supporters.

It's true that there's still Trump parasites in Congress and others who are burrowed into some key positions in government agencies... like The Pentagon.

While it'll take voters to cleanse Congress, the rest of the Trump trolls submerged in the system will eventually be rooted out.

So where will Donny and his ragtag cult members go after being purged from the government?

My first guess is some will find fame (notoriety) on right-wing TV and websites continuing to serve orange Kool aid to all who'll listen.

I think it's safe to say some will end up in jail.

As a matter of fact, Trump's fat ass could end up behind bars if the two criminal AG cases against him in New York are successfully prosecuted.

I have to pause here. It feels so good to think about that very real possibility.

More likely, Trump will continue to rip off his gullible supporters by having them send money to his most recent PAC, giving him and the family a piggybank to ruthlessly raid (remember the Trump Foundation charity rip off?).

Moving on, I suspect there will also be Trumplicans who won't find safe harbor anywhere in the big business world again.

They'll have to settle for minimum wage jobs like cleaning toilets' in Trump-owned hotels.

But there's one more thing...

Those GOP members of the House and the Senate who got booted out (or retired) after the election will have to face their legacies.

History will not be kind to them for enabling corruption while slavishly following a sociopath who did everything he could to undermine our democracy.

I wouldn't bet on it, but there might be a few Trumplicans who repent for their crimes against America and go on to do some good in society.

Quote for the Day; "Guilt and fear are a kind of rot. It spreads unless it's cleaned. And there's only one way to do that." -Lee Goldberg

Posted by ImBlogCrazy at 6:53 AM