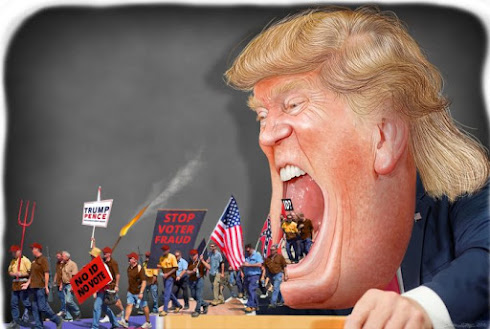 With one week to go Americans have to endure  blatant attempts to suppress their votes daily.

You can feel the tension on the 5 o'clock news when reporters describe armed Trump supporters lurking near polling places.

Two days ago, armed Biden and Trump supporters stood across a street in Michigan heckling one another. It could have gone beyond that, but thankfully didn't.

It's unclear how many troops would be sent to each city and where they would be stationed while deployed. Guard spokesman Brandon Jones said the troops might not be sent to polling stations.

That means they could be sent to various places around the cities where protests and flare-ups are possible.

The rest of the states are girding themselves for a tough week ahead by consolidating local authorities and government agencies into action plans to protect voters.

Everyone expects trouble on Election Day, and possibly for days afterward. How scary is that? I've never seen anything like this relentless assault on our democracy by a sitting president.

Trump's minions are in the courts trying to stifle voter turnout in several swing states with decisions due this Friday. 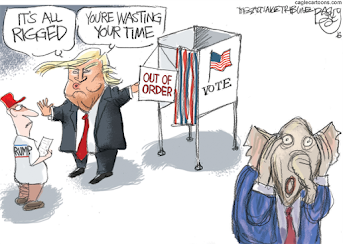 The great divider himself has already put the nation on notice; he's not going to respect the results and plans on contesting them.

His twisted plan to take his grievances to the Supreme Court to contest the election was aided by confirming Amy Barrett days before the election.

He's planning on Barrett and the conservative majority to overthrow the election results and to crown him king.

As Trump continues to hold multi super spreader rallies daily amid a surge in the pandemic, the message is clear... Trump is counting on his good old friend CHAOS.

Quote for the Day: "It turns out that an eerie type of chaos can lurk just behind a facade of order - and yet, deep inside the chaos lurks even eerier type of order." -Douglas R. Hofstadter