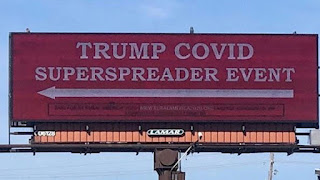 It's another split screen 2020 moment as Americans attend red and blue rallies days before the election.

One screen shows a Biden rally with supporters safely distancing in cars and wearing face masks. The former vice president is talking about science, unity, and reality.

On the other screen we see a Red rally with supporters packed together like sardines and not wearing face masks. Trump is pumping his tiny fists up and down and ranting about how the pandemic is over.

Trump has been holding as many as three super spreader rallies a day. His plans for holding a rally in Fayetteville, North Carolina, were cancelled due to bad weather. Ahhhh....it may save a few lives.

It's sad watching Trump supporters freezing and being hospitalized, or passing out from extreme heat, in super spreader rallies to see their TV celebrity president.

Republicans are doing their best to suppress votes, especially in swing states. The courts have been inundated with challenges to voter's rights in every state.

The intelligence community is warning every state electoral board about cyberattacks from Russia, Iran, China and parts unknown. The frequency of the attacks have increased this week.

During these desperate waning days of the election, Trump's minions are seeing the writing-on-the wall, and it's indicating the liar-in-chief is losing the race.

They realize it's Trump's last stand even as they attempt to suppress voters from going to the polls.

Quote for the Day: "If voting didn't matter much, foreign governments wouldn't try to influence it. And if voting doesn't matter much, we wouldn't see the efforts in America to make it harder for certain people to vote. Your vote does matter. --Kim Wehle