Pandemic Diary Day 97: About the Team Trump Debacle in Tulsa 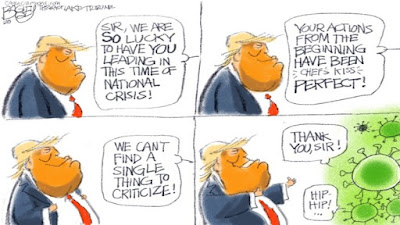 I confess that the Trump team had me believing there were at least 100,000 people who signed up to attend his rally.

Some enthusiastic Trumpies even touted that there were actually a million calls to attend his CoronaFest. The propaganda prior to Trump's super spreader show must have been pretty effective. It had me wondering just how rabid his supporters really were.

When I watched the events leading up to Trump's COVID-Fest yesterday, it was hard to tell how many followers where there. The first hint that Team Trump's claims of a massive turnout where pure bullshit!

When the outdoor area that was supposed to be for the overflowing crowd was shut down an hour before Trump was set to speak I suspected the GOP party wasn't attracting boisterous crowds of fans.

When the media cameras started showing a nearly empty upper deck as Trump waddled out onto the stage, reality bitch-slapped Team Trump.

After listening to statistics this morning, the number of attendees was about 7,000. That's still a lot of people willing to die to hear and see their beloved leader live. It's also no where near filling the arena which holds up to 19,000 people, let alone a huge overflow.

No matter how hard Team Trump tries to spin their Great Come Back rally, it showed me one thing; enthusiasm among those voters in 2016 who elected him isn't there now. I managed to listen to an hour of alternate reality before I had to turn the TV off and go wash my hands!

Apparently the orange clown ranted for two hours. That's a lot of toxic air mingling with the coronavirus that was already directly related to the rally. Six Trump Team workers tested positive, but that didn't matter. The show went on.

This morning as I enjoy my coffee, I feel more confident than ever that Trump will lose in November. Just thinking about it is a good enough Father's Day gift for me.

Eye popping report -
My concerns about the coronavirus spreading here were confirmed after reading a report the Oregon health Authority released Friday.

The weekly share of Oregonians testing positive has more than doubled since May 15th, when the state started reopening. Right now the positive test results are at 4.1% for the week ending Friday.

Like many other parts of the country it now appears we reopened too soon.

With summer officially here today there's no way to get people to go back indoors, so we must live with the results of one long endemic...where it just goes on and on like an evil Energizer Bunny!

Quote for the Day; "The thing about embracing our own chaos is that it never becomes clear when you need to stop." -Trista Mateer
at June 21, 2020