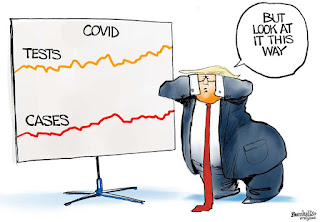 I woke up smiling this morning.

I don't know if it was because I was dreaming about Team Trump's humiliating shit show that was billed as his Great Reopening campaign rally on Saturday, or what.

It was another crowd size moment when millions of adoring fans were said to have signed up for the rally, and only 6,200 showed up, dutifully not wearing face masks or practicing social-distancing... despite all the extra room there was in the arena.

After a proper wake and bake and coffee, I thought of something else that makes me smile today.

Love him or hate him, John Bolton's tell-all book on Trump - The Room Where It Happened - will be available tomorrow. I've already seen selected segments on the news, and its another glaring embarrassment for Trump (as if his disastrous rally wasn't bad enough).

I predict nothing will affect Republicans stance on backing Trump in this book. The only thing that may happen is Bolton's bucks (reportedly $2 million) for penning the tome will end up in the U.S. Treasury thanks to a lawsuit from Trump minions.

I won't shed any tears for Bolton. He's come up on the wrong side of history by not testifying before Congress. This vengeance-fueled tell-all will be another needle in Trump's fat ass.

Now for a "Bigly" reason to be happy this week:
The one thing that really strikes fear in Trump's black heart is his taxes and fraudulent finances being exposed. He's fought successfully for three-and-a-half years by appointing minions in the right places to protect his vile secrets.

Remember the Supreme Court that Trump claimed doesn't like him recently because of a couple of decisions that didn't go his way? Pretty bad timing to be whining.

As soon as this week, the Supreme Court will have a decision on whether Trump's accountants must turn over his financial records and tax returns over to House Democrats and New York prosecutors investigating hush money payments.

Yeah. The bigly one.
The corrupt Department of Justice under AG Barr's direction, has been making the case there should be a different standard for the President than for everyone else.

It's hard to stress the importance of this case which is a key legal test of Trump's attempt to wrap himself in a bubble of total immunity while in office.

I'm keeping in mind that Trump's lawyers have lost in every court they went to (six courts with appeals over three years) and it's going to be a reach to go against all of those judges and their judgments.

I know anything could happen. The Supremes may kick it back hoping it'll go away in an endless loop of litigation. But for today, I'm going to bask in the glow of imagining that orange wretch in the Oval Office finally being exposed for the crook he's always been. 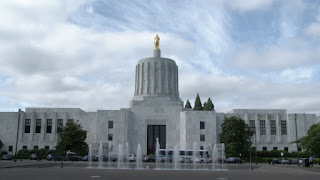 Oregon lawmakers will be considering 13 new bills Wednesday during a special session.

The Democratically controlled Legislature will be focusing on passing police accountability laws and measures to respond to the coronavirus.

COVID Stats - The total number of confirmed coronavirus cases in the state has reached 6,937. 190 people have died from the virus.