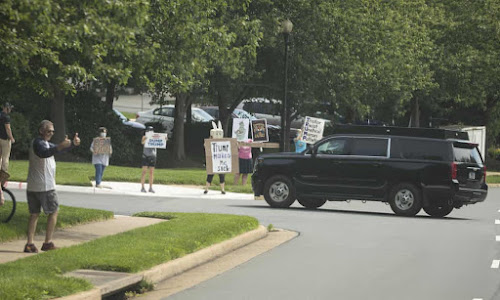 AP Photo by Alex Brandon -    Trump motorcade going through the gates of  Trump National Golf Club Saturday in Sterling, Virginia
Dear Diary,
Only someone with utter contempt for reality would avoid it as much as Trump does. Documenting his lies have become a national pastime.
Americans can see he's delusional about claiming victory over the pandemic. One thing that has not changed is Trump has to get his golf time in.
During a devastating surge of COVID-19 cases in the last week which has surpassed infection records set in April and May, Trump was seen waddling around in his little golfing outfit (white polo shirt and red MAGA hat)) on Saturday...the day after he said he would stay in Washington DC to "make sure law and order is enforced" amid ongoing anti-racism protests.
I can't help remembering when Trump campaigned on how much Obama golfed during his two terms. I looked it up and discovered President Barack Obama golfed 333 rounds during his entire presidency.
Trump has golfed 271 days in three-and-a-half years, or once every 5 days. Twice as much as Obama. Once again reality has a way of overtaking Trump's lying ass and slapping him in his orange mug.
The day of the visit to his private golf course came as the number of new coronavirus cases per day hit an all-time high of 40,000!
The only place Trump is comfortable is on the golf course - one of his of course - where he can totally control his environment. He cheats shamelessly, knowing most people won't call him on it. It's a magical piece of real estate where he makes hole-in-ones all the time.
Which reminds me of a story about North Korea's dictator Kim who apparently also likes to golf. His state-controlled media once told a tale where Kim aced a perfect round! Nothing, but holes-in-ones!
I'm not sure who is more corrupt, or a bigger liar; Trump, or Kim? It's a toss up.
On the Homefront - Medford, Oregon 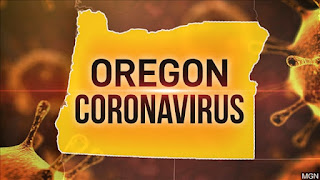 The number of coronavirus cases in Oregon hit their second highest daily mark since the COVID-19 pandemic began months ago: 250 infections.
The biggest outbreaks have been coming from churches. There was a church in Northeast Oregon's Union County last week that accounted for 278 confirmed coronavirus cases.
There's been 7,818 total confirmed coronavirus cases and the death count is up to 202. The most troubling news is the healthcare experts forecast showing "alarming" growth in future infections. "Exponential growth" is predicted by mid July.
It's a scary model that suggests Oregon could see anywhere from 910 new daily infections to an astounding 5,030 a day by July 16th, depending upon the level of spread.
Quote for the Day, "A storyteller makes up things to help other people; a liar makes up things to help himself." -Daniel Wallace
at June 27, 2020