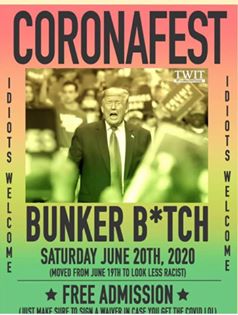 Healthcare officials in Oklahoma have been pleading with the Trump campaign not to hold a rally of 19,000 people inside an arena...
in vain.

The show had to go on. Trump will have his way and people will die because he needed a massive ego boost.

Trump's super-spreader vanity show is a complete denial of science. The world is watching, aghast that an American president is so stupid that he ignores the expert advise of the top healthcare officials in America.

I'm reminded of lemmings walking off a cliff - except they're people signing their lives away with disclaimers that they won't sue Trump and his minions if they get COVID-19 or someone they love does from their exposure.

Trump is truly unhinged now. He no longer cares about anything other than his beloved rallies where's he's transported into an alternative universe full of people who love him no matter what an asshole he is. 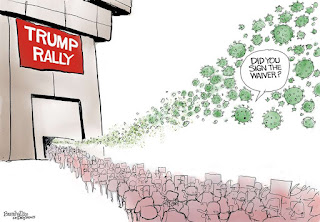 The reality is the rally could have been held outside.

At least it would have been safer than being inside a giant petri dish with screaming sociopaths standing shoulder-to-shoulder in shows of unity with Trump's stupidity.

Trump minions try to use a false equivalent by claiming it was okay for Black Lives Matters protestors to turn out in the thousands, but when Trump holds a rally for thousands it's wrong.

No one "gave" the protestors permission to gather. Many wore masks, and they all took place outside. Comparing a large event with thousands inside a building with face masks optional, is just stupid and disingenuous.

But it's all his minions have. Trump's show is here today, along with the most deadly virus on the planet.

The results of his ego-building reality show is going to be more outbreaks of COVID-19. Not just in Oklahoma, but in the states where Trump fans traveled from to see him.

What makes me sad is the innocent people who are going to come into contact with Trump attendees who'll be potentially spreading the deadly disease.

Future indoor gatherings should no longer be called rallies by the Trump team. A much more appropriate term would be Pandemic Parties! 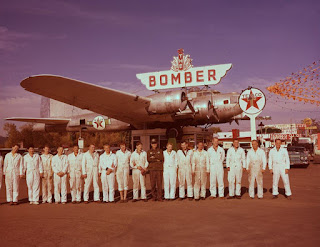 **Where to go this summer -
The Peak Northwest podcast offered up some suggestions for outdoor activities this summer. Here's an updated list of what outdoor spaces have reopened.

**Back to Masks - Oregonians must wear a mask in public starting June 24th. That should be interesting. I see no way to enforce it. When Shirley and I go out we seldom see people walking around outside wearing masks, let alone inside.