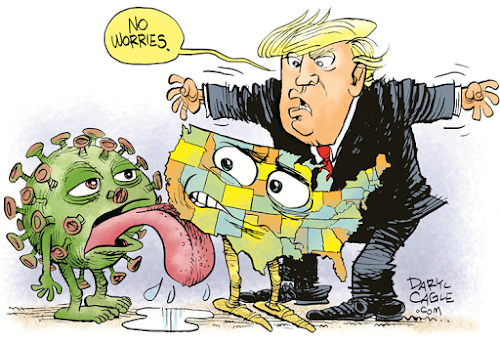 Dear Diary,
When historians look back at this chaotic year two things will stand out.
Trump's total denial of reality (in all things).
and
He tried to bully a pandemic by attempting to deceive Americans about how deadly it is.
Both remarkable failures for an American president. Especially one who is trying to get re-elected. It's almost like Trump has given up and cranked up his crazy meter just to feed his cult followers, and everyone else be damned!
As Trump's fate becomes clearer (that he's going to lose) his last restraints have collapsed. No more listening to adults. He's still going after DACA despite losing his cruel case in the Supreme Court. He's going after Obamacare (again) in the middle of a pandemic when Americans desperately need health care. He's firing career officials to give his golf buddies jobs. It goes on.
Underwater in nearly every poll in the nation, Trump is still trying to dial up 2016 and replay his biggest hits like "Build that Wall!"
The problem is this is 2020. Trump's not running against someone who was even more unpopular than he was this time around. Joe Biden's popularity is increasing weekly, as political pundits whisper, "Landslide win for Uncle Joe in November."
Trump has been a reflection of what's bad in America. He's a racist and a serial liar. Most Americans know that now after three-and-a-half of the most chaotic years in our nation's history.
I expect the next four months will be full of challenges. Can we as a nation stand up to Trump's last ditch attempts to destroy our Democracy?
I sure the hell hope so.
On the Homefront - Medford, Oregon 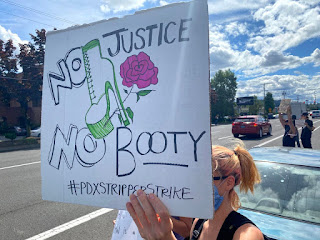 STRIPPER STRIKE
Portland strippers marched for equal scheduling of Black dancers.
I just love their motto: No Justice - No Booty!
To date, 27 clubs have signed on to make the necessary changes to make their workplaces less discriminatory. You go girls!
**COVID stats - The Oregon Health Authority reported two new deaths and 124 new cases yesterday. There's 7,568 confirmed cases of the novel coronavirus and 202 people who have died from it.
Quote for the Day: "Remember, a fact is a fact, no matter how hard the liars amongst you might try hushing it up." -Billy Childish
at June 27, 2020