Sitting on the patio drinking coffee and watching the sun come up on a warm summer day, it occurred to me that Trump's days are numbered.

I think he knows it too. It's more than national polls showing him behind Biden on nearly every category possible that has the orange meathead worried. His big comeback rally was a supreme debacle. It was also a wake-up call.

Trump's support is shrinking. When that arena was not filled with rabid fans just fainting at the sight of him it sent a shiver down his contorted spine.

I've heard the ridiculous claims by Trump's minions that it was a "perfect" rally and there were 12,000 attendees instead of what the local Fire Marshal said; 6,200 attendees. About a third of the BOK arena.

Future rallies are on shaky ground as Trump's now disgraced campaign manager Brad Pascal tries to hold onto his job. A rally/political moment is set for Phoenix, Arizona today at a megachurch supporting young Republicans. It will be another super spreader event just days after Tulsa.

The volume and quality of Trump's daily whining beats anything previously during his administration. He wakes up at all hours tweeting grievances and cryptic messages.

The moment his piggish eyes open in the morning he reaches for his cell phone and starts tweeting and retweeting conspiracy theories. Each more vile than the last.

In all fairness, Trump has a lot to be concerned about. Despite using and abusing the AG's office with an enabler, and the Department of Justice along with 11 intelligence agencies, his three-and-a-half years of corruption are being exposed with every new revelation in 2020.

John Bolton's new book, "The Room Where it Happened" is available today. I can just imagine what Trump's tweeting this morning.

The thing that strikes me most is how out-of-touch Trump is with the country and reality. The con man is slipping. The White House staff struggles daily to translate what Trump "really means" when he says outrageous things.

During the rally he ranted on how he told "his people" (I imagine evil red Smurfs when he says that) to slow down testing in the country.

Immediately after the rally, and still this morning, the press has been asking Trump minions if he was serious about slowing down the testing process?

I'm still cracking up at Peter Narvarro's response when asked that question:

"Oh, come on!" He laughed and grinned stupidly. "Can't you tell a joke? He was kidding!"

The only problem with that claim was Trump contradicted him the next day when a reporter asked him if he was slowing down testing in the country?

As usual, the Moron-in-Charge played coy, and whined that too much testing was making the country look bad. Translated; making him look bad. Trump has ways of saying yes, without using the word. It's an old mafia trick he learned from his New York underworld buddies back in the day.

The way I see, it Trump's Days of Whine and Rallies are coming to an end in 136 days. 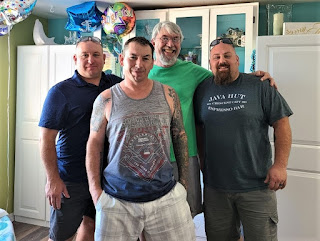 They're all fathers too.

Front row, left to right; Richard, Nathan, and Eli. I'm the galoot in the back row. Very proud of my boys.

**COVID Stats - The state reported 146 new cases of the coronavirus, and two new deaths yesterday. That brings the total to 7,083 confirmed cases, and 192 deaths in Oregon.

More than a third of the state's cases have been reported since June 7. A report released Friday showed the jump in numbers isn't due to more testing. They say the virus is spreading more.

I do worry about the fact that most people around here in Medford don't wear masks - indoors, or outdoors. Shirley and I are continuing to stay at home as much as possible. When we do go out, we practice social-distancing. Restaurants are still out of the question.

Quote for the Day; "Pressure will squeeze whining out of losers and winning out of achievers." -Orrin Woodward
at June 23, 2020