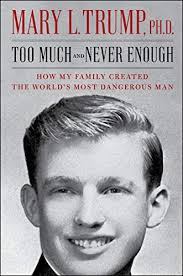 The indignities are coming soon.

Trump knows that between this month, July, and September, three books are being released about him that will turn his normally orange face red.

On June 23rd, former White House national security adviser John Bolton's long-awaited book on Trump will be available to the public. Trump's minions have been going through Bolton's book, "In the Room Where it Happened," since January.

The legal fight over the release of the book, which is billed as an insider's rebuke of Trump's foreign policy, escalated Tuesday when the Trump administration went to court to try to claw back Bolton's earnings for the book and to potentially stop its publication.

The next Trump tell-all book is being released on July 28th, and was written by his niece, Mary. I suspect this is the book that's going to fry Trump's grits!

"Too Much and Never Enough," is described by the publisher as a "revelatory, authoritarian portrait of Donald. J. Trump and the toxic family that made him."

In the book, Mary describes a nightmare of traumas, destructive relationships, and a tragic combination of neglect and abuse. She explains how specific events and general family patterns created the damaged man who currently occupies the White House.

The real bell-ringer in this book is Mary's admission that she was the source for the Pulitzer Prize-winning investigation by the New York Times into Trumps taxes, published in October of 2018. She helped by supplying her grandfather' Fred Trump Sr's tax returns, along with other highly confidential family financial documentation.

The third book in the 2020 collection about Trump was written by Pulitzer Prize winning author, Bob Woodward, in a follow-up of from his first book on Trump titled Fear. It's scheduled for release on September 15th.

Fear provided front-row accounts from inside the Oval Office of feuds and clashes within the administration, as well as how senior administration officials and Trump's private lawyer tried to stop him from acting on what they viewed as his most dangerous impulses.

Woodward's new book is still untitled, with the description, "Bob Woodward's second work of nonfiction on the Trump Presidency." 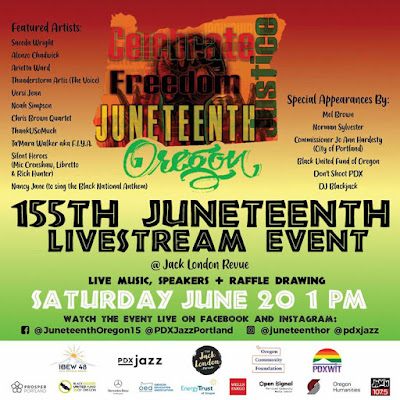 Viewers can tune into the Jack London Revue at 1 p.m., June 20th, to watch Oregon's Juneteenth celebration livestreamed. The free celebration is produced by PDX Jazz.

Quote for the Day; "Moral contempt is a far greater indignity and insult that any kind of crime." - Friedrich Nietzche
at June 18, 2020