Pandemic Diary Day 92: Americans Tire of Waiting For a Vaccine 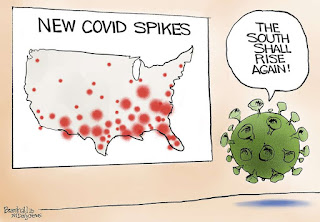 Observed in the media: Mass gatherings sans safety precautions in every state.

Fact: COVID-19 never left. It's busy killing people in the hundreds daily, and cases of the novel coronavirus are rapidly going up in 18 states during the last 10 days.

No end in sight: With no vaccine available this pandemic is not just going to magically disappear no matter how much Trump wishes it will.

In summary
The national reservoir of patience is exhausted.

The choice of "being free" comes with the possibility of death.Covid-19 still stalks our streets and when people choose to go out, especially without face masks and social-distancing, they risk dying, or of infecting someone they know.

The country unofficially reopened too fast. Protests and cabin fever led the way out of the safety of partial quarantines, and rolled out the perfect conditions for super spreader events.

There's no turning back. Not a politician in this land would dare to shut down the economy again. Especially in an election year.

Regardless of how many lives are lost to infections, socializing and going back to work weighs more towards making the final decision than one's health. We humans are imperfect beings. 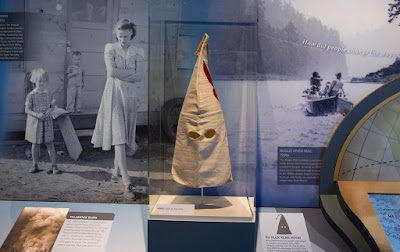 From the Oregon Historical Society exhibit, "Experience Oregon"
Seeing the topic of the day is about racism, I decided that a brief history of Oregon would be relevant.

Oregon's founders sought a "White Utopia," a strain of racism that lives on even as state celebrates its progressivism

Oregon became a state in 1859. Slavery, the issue that was tearing the nation apart, was banned in the new state. The leaders believed they had a better model on how to deal with the race problem; black people wouldn't be allowed in the state. Period.

Oregon consistently goes "blue" in presidential elections, and conservative commentators invoke the name of its largest city - Portland - as a shorthand for hyper-liberalism. 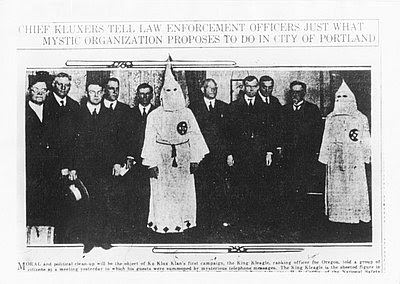 The fact is, Oregon is also one of the whitest states in the country by design.

In 1921, the Portland telegram published a photograph (above) of Oregon Ku Klux Klan leaders outfitted in full regalia, including their hoods, posing with Portland officials during a meeting of "Law and Order."

Quote for the Day; "Fatigue makes fools of us all. It robs you of your skills and your judgement." - Harvey Mackey
Posted by ImBlogCrazy at 7:46 AM