Pandemic Diary Day 105: Denying the Truth is Not an Ideology - It's the Failure to Face Reality 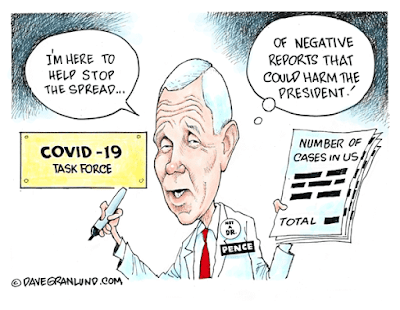 Dear Diary,
For a moment I thought Texas was doing so good after listening to Gov. Abbot and Mike Pence at a press conference yesterday, I wanted to clap in appreciation.
Then reality kicked in. It was a dog and pony show that tried to overshadow what's really happening in Texas. The state has become the epicenter of COVID-19 outbreaks, with Arizona and Florida not far behind.
While Texas was setting a record for coronavirus-related hospitalizations for 17 days in a row, Pence and Gov. Abbot congratulated each other on what a great job they were doing to contain the pandemic.
Even though the positivity rates of the infection went from 4 percent to 13 percent in three weeks, Pence praised everyone in the meeting for what a good job they were all doing.
What Pence and Abbot were doing were denying the facts all around them and blowing smoke up the public's collective ass! Everyone attached to Trump's version of an ideology is simply failing to face reality.
There's no room for truth on Trump's crazy train. You have to believe he's the second coming of Jesus Christ who'll lead America to greater heights. You also have to believe it's okay for him to walk down 5th Avenue in New York and kill someone without any consequences.
Trumpism is an infection. Like COVID-19, or Cancer. Not an ideology. There's no political strategy involved when it comes to appealing to his hardcore base. He uses fear and racism, reaching out to the worst elements of our society to help contribute to the chaos.
The Republican Party has abdicated it's conservative values in favor of Trumpism. Trump's GOP enablers have shed any semblance of conservative ideology in their pursuit of power.
I would note here that Trump's inability to see that he's out-of-step with most of the country and reality will contribute to his defeat in November.
On the Homefront - Medford, Oregon 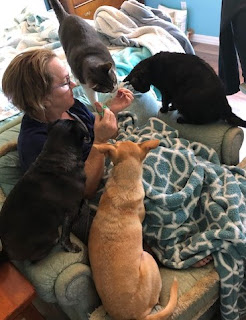 Taking Turns
Shirley often finds herself surrounded by our animals when it comes to sharing food.
I love the way the cats and dogs get along. Such manners. They're better than human beings in oh so many ways.
The black cat, Ollie, is blind but it doesn't seem to inhibit him at all. He holds his own in the chow line and when it comes to playing.
**COVID stats - We're breaking the wrong kind of records in Oregon right now. For the third day in a row there's been 200 reported cases of the coronavirus. Not the kind of stat you want to brag about.
Last count, we have 8,541 cases of confirmed novel coronavirus cases with a total of 202 fatalities from the virus. Part of our problem is that contact tracers (we currently have 600) have not been able to identify the sources of an unsettling percentage of new cases: one-third statewide.
It's starting to feel like this pandemic will never go away.
Quote for the Day; "Truth cannot be constructed. To live in ideology is, as Havel so eloquently reminds us, inevitably to live in a lie. Truth cannot be revealed. We cannot be creators, only receptors." - James W. Sire
at June 28, 2020