Pandemic Diary Day 55: During America's Chaotic Coronavirus Stars Emerge For the Right and the Left

I understand that New York has the most COVID-19 cases - NYC's led all the way - and deaths, since surpassing Washington in March. That's news. But for how long?

Andrew Cuomo, whose seen more TV air time than his brother Chris (a news broadcaster), has become a Democratic star since he began holding his daily COVID-19 chats (that often meandered into other subjects). 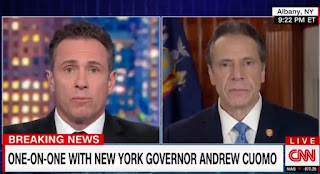 Liberal political insiders have been inspired enough by his performances to look at Andrew for president in 2024. He's so articulate. The opposite of Trump.

His meteoric rise to fame is just another example of a star being born in our new pandemic universe.

While Andrew is a good example for the Left, the Right has plenty of candidates for stardom too. But Trump's new PR puppet, Kayleigh McEnany, is clearly the breakout star from the swamp in Washington DC.

I was in awe of her Trumpian qualities, and how quickly she let the press know she had no intention of telling the truth about anything - unless it benefited Stump.

McEnany fits the role of a Conservative star; a blond, blue-eyed bimbo with a brain the size of a shriveled kumquat, but loyal unto The Donald.

After going for over a year without a press secretary, it appears Trump picked the right bimbo for the job. Her star is on the rise.

On the Homefront - Medford, Oregon
**The Oregon Health Authority reported three new deaths from COVID-19, bringing the state total to 124. Cases of the virus have climbed to 3,068 statewide. 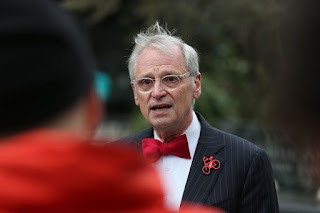 **Great Q and A coming up!
(Photo by Dave Killen)

Oregonians get to ask Rep. Earl Blumenauer (right) questions about Cannabis and COVID-19 at an upcoming May 13th webcast - "Where Does America Go From Here?"

Quote for the day; "When you become famous, being famous becomes your profession." James Carville
at May 10, 2020