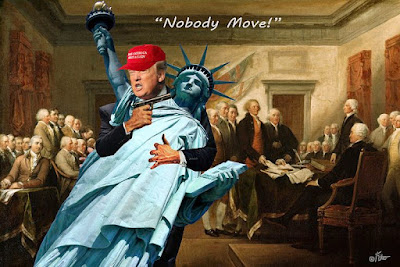 One of the most important cases in the history of our nation is going before the Supreme Court today. You can listen to oral arguments on CNN live stream, and other platforms.

The court will be ruling on whether Trump's accountant and some of his lenders have to turn over financial information to congressional committees. Thus far, Trump has stopped all the efforts to make him reveal them.

The first case asks whether a congressional committee has the constitutional and statutory power to subpoena the accountant for Trump and some of his lenders for his financial records, including his federal income tax records.

The second case asks whether a subpoena issued by a state grand jury to Trump's accountant is subject to precedent regarding political questions.

The judges are expected to have a decision by the end of June. I won't be surprised if the Supremes decide to punt these cases by using a legal escape hatch called the "political question doctrine."

It would give them the opportunity to weasel out of making a tough political decision. It would also mean no one will ever be able to see Trump's financial records.

Worse still, it would prove that Congress has no power over a wannabe dictator like Trump who managed to silence the highest court in the land!

A reporter asked attorney general Bill Barr how he thinks he'll be remembered in the history books the other day.

Barr's reply was, "It depends on whose in power."

I beg to disagree. There'll always be historians without political motivations who are documenting facts with evidence; recorded speeches, videos, papers written for publications, etc. al.

Among the Trump minions in government who will go down in a Hall of Shame someday, there's none more complicit in enabling Trump's corruption than Barr the Shameless.
His latest demonstration of abuse of power (attempting to get Michael Flynn off the hook) has nearly 2000 former justice department officials calling for him to resign.

Historians are going to laugh at Mike Pence. One of many videos of him emulating Trump's every move (the infamous "he put the water bottle on the floor" because Stump did) will be in the introductory part of Pence's official White House bio.

There are too many other Trump minions in the government who'll be remembered for corruption to list here. He's managed to inflict serious damage to our democracy, and it's going to take time to heal.

On the Homefront - Medford Oregon
**My wife, Shirley, casually mentioned that she had a hair appointment on June 18th, the other day. That, of course made me curious when hair salon's are expected to open up in Oregon.

Turns out that May 15th is the target date for phase one (where hair salons and massage parlors open) of Gov. Brown's reopening plan for the state.

From what I've read in the local newspapers, and heard on TV, a lot of businesses are afraid to open yet however. Especially the kind that require up close contact.

Shirley may find out that her hair appointment is going to have to be changed in June if there's not more confidence over safety for business owners and the public alike.

**It's not my imagination - very few people are wearing face masks in Medford. I can't speak for other nearby cities, but Medford seems to be lax about the rule. Yet, most people are still staying-in-place. A lot of very quiet streets.

Quote for the day; "As democracy is perfected, the office of president represents, more and more closely, the inner soul of the people. On some great and glorious day the plain folks of the land will reach their heart's desire and the White House will be adorned by a downright moron." -H.L. Mencken
at May 12, 2020