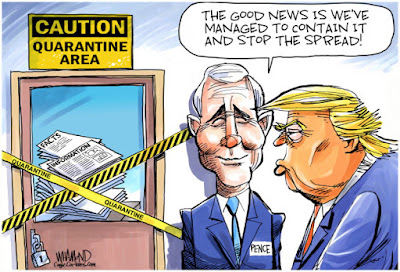 Watching Republicans cower whenever Trump speaks is reminiscent of The Godfather holding court over his minions.

Trump is a thug, a bully, a serial liar, and a world class narcissist, but GOP lawmakers pretend to believe every uninformed word he utters... even in the midst of a pandemic.

The abject fealty he demands from every government head and his cabinet is remarkable. Watching his puppets, like mealy-mouthed Bill Barr, Moscow Mitch, Crying Kevin McCarthy, and Pompous Pig Mike Pompeo deny facts is a daily occurrence.

Those gutless Republicans are making a big mistake going down with the Trump Titanic's unhinged course to chaos. Mass defections from within his own base's elderly ranks is not going to benefit the down ticket in the upcoming national elections.

Especially because they're (the elderly) dying off in record numbers. Blaming the Democrat's can't conceal the reality of what's happening.

It's Trump's stupidity. His rejection of science. His muffling of healthcare officials leading to over 82,000 deaths and counting because of his attempts to hide the enormity of the coronavirus early on.

Trump is NOT a LEADER. He's a sick individual who by horrible twists of fate happens to be our president during a pandemic.

I suspect voters are going to be looking for a real leader this fall. Not another four years of a crazy man child whose done more harm to our Constitution, and the laws of the land than any of his predecessors.

This should concern those Republican lawmakers who have been enabling his corruption and are running for re-election riding his tattered cap of imperial office.

It may be too late for those feckless followers to cut loose from Trump. It would take an act of defiance - like telling the truth - when asked questions about their role in Trump's swamp. I don't expect that to happen.

History may prove me wrong, but based on the polarization in this country...I don't think so. The rats are all going down together in the Trump titanic this November.


On the Homefront - Medford, Oregon
**Only 3 more cases of coronavirus reported overnight bringing the total confirmed novel coronavirus cases to 3,286. The death toll now stands at 130.

**Interesting study - The Oregon Health and Science University will begin notifying people for a yearlong study to track the spread of coronavirus in the state.

**Scum for the Day - A 42-year old douche bag from Gresham, Matthew Owens, is facing federal charges for smuggling the drug chloroquine (Trump's favorite miracle COVID-19 drug) from China for delivery to others during the pandemic.

The $2,000 penalty against National Frozen Foods was the first of its kind since Gov. Kate Brown ordered businesses to ensure space between workers.

Quote for the day; "We can easily forgive a child who is afraid of the dark; the real tragedy of life is when men are afraid of the light." -Plato
at May 13, 2020