Pandemic Diary Day 54: 'I Should Write a Book About This Novel Coronavirus' 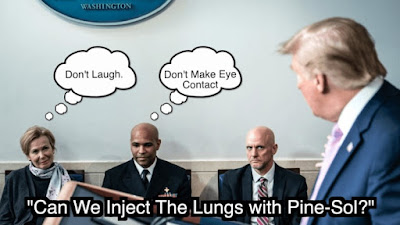 I'm beginning to think I should be writing a book instead of keeping notes in this diary.

The shit that's happening daily has all the makings of a thriller. I know there's been other virus outbreak movies and stories in the past, but nothing to compare with what we're all living through right now.

The most corrupt president in American history is faced with a massive pandemic. When intelligence reports start filtering in about a growing pandemic coming from China, the president does everything he can to deny it'll be a problem for the United States because he doesn't want the economy to be hurt.

Months later, with over a million cases in the country and an increasing death toll at 80,000, chaos reigns. Meanwhile the president is stopping scientific recommendations coming from the CDC on how to safely re-open the country because he wants people back to work now - safe or not - because he's worrying about being re-elected.

The press is exposing the president and his puppets corruption, but nothing seems to stop them. The president's attorney general, and cabinet members have sworn fealty to the president who would be king.

I could describe how the courts fought constant battles in the defense of the Constitution that the president was hellbent on destroying. Vignettes of some of the real dastardly White House staff and other politically appointed goons, would flesh out the storyline.

I would have to end it with the evil president and his cronies being overthrown in a general election by a country that had enough of their crap.

But, for now, I'll keep making my daily entries with observations and opinions, hoping that we'll all have a storybook ending this year.

On the Homefront-Medford, Oregon
**Beery sad - Brian Whitehead, owner of Rusty Truck Brewing didn't want to throw away the beer he couldn't sell (before it went bad) so he gave it away. That's right free growlers as long as they lasted!

Yesterday, when I Googled to see how far away Lincoln City (where the brewery is at) was from where I live in Medford, it was a four-and-a-half hour drive away. No beer is - in my humble opinion - worth that long of a trip. Even for free. So I passed.

**I watched a flotilla of helicopters circling around in the valley yesterday, and found out there were going over hospitals in a salute to nurses. How nice.

Meanwhile, those same nurses, hailed as heroes, are now facing a new reality in Oregon. Cash-strapped hospitals are cutting their pay and their hours. 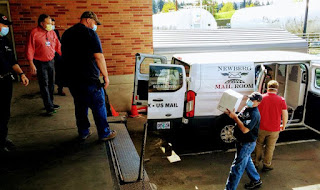 **Wines for the Front Lines
(Photo by Michael Alberty-For The Oregonian)
Gotta love this! 154 wineries donated wine as part of the Willamette Valley Wineries Association project to hand out wine to hospital employees at the end of their shifts!

What was described as a "little snowball" of an idea placed a million dollars worth of wine in the hands of health care workers from Eugene to Portland.

Quote for the day; "A great book should leave you with many experiences, and slightly exhausted at the end. You live several lives while reading." - William Styron
at May 09, 2020