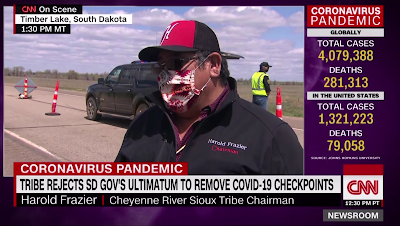 Documenting this pandemic is like trying to catch a tornado with a sandwich-sized paper bag.

There's so many stories to report on each day it's hard to select which ones to highlight. Mainstream headlines have been chock full of various segments of society that are harder hit than others.

There's no doubt that the poor and minorities are suffering more than the rest of the country. Casualty counts among Blacks and Latinos are disproportionate to the rest of society.

Today however, I'm highlighting the plight of the Cheyenne River Sioux Tribe in South Dakota.

Fighting for the tribe's very survival, tribal chairman Harold Frazier has refused to take down its coronavirus checkpoints despite Gov. Kristi Noem's demands to do so.

The main purpose of the checkpoints was to monitor and try to track the coronavirus coming onto the reservation.

But, because the new Republican playbook is all about reopening states (whether or not it's safe or not), Gov. Noem decided it was okay to risk the lives of 12,000 people who only have an eight-bed hospital.

Frazier pointed out that the lack of resources makes his tribe especially vulnerable to "hot spots." The only critical care available is three hours from the tribal lands. A death sentence for a sudden flood of patients.

By taking down the tribe's frontline of defense against a deadly virus, I'm reminded of the shame of Wounded Knee, where people were massacred by a government that was supposed to be protecting them.


On the Homefront - Medford. Oregon

**As of today there's been 3,228 confirmed cases of coronavirus and 127 people have died from it. 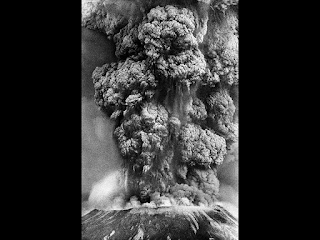 (Photo by Don Wilson 1980)
There's an exhibit at the Portland Art Museum "Volcano!" but the museum is closed right now.

In the meantime, the exhibit can be viewed online.

**The Oregon State Penitentiary in Salem is locked down today after a fight broke out among inmates in the yard.

About 215 inmates from the same cell block went at it until correction officers restored order.