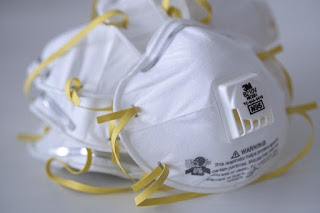 The latest coronavirus controversy is about wearing face masks.

In the rush to open things up in the country, face masks have become a flash point... to wear, or not to wear?


The mandate to wear masks is being interrupted as government overreach by Trump supporters, fringe militia's, and some desperate businesses.

The result has been escalating tensions that have turned into protests, rebellions, fights, and even two deaths; one by stabbing, and the other - a security guard in a Michigan Family Dollar Store - was shot point blank in the head over asking someone to obey state orders and to wear a mask in the store!

The rest of America (according to the most recent poll 82% of Americans) are willing to sacrifice and wear face masks as long as it takes for personal and societal safety. 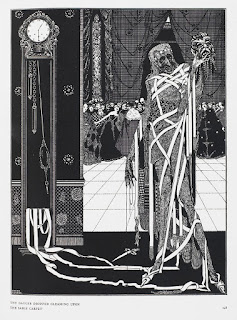 I see a parallel between fact and fiction in Edgar Allen Poe's fictional short story...

"The Masque of the Red Death,"

and how the Trump administration responded to the pandemic.

(Illustration by Harry Clarke. On front cover of Edgar Allen Poe collected works and The Masque of the Red Death)

In a nutshell, the story follows Prince Prospero's attempts to avoid a dangerous plague, known as the Red Death, by hiding in his abbey.

The prince and other wealthy nobles got bored after a while and decided to have a masquerade ball.

The abbey had seven rooms, each decorated with a different color. In the midst of their revelry, a mysterious figure disguised as a Red Death victim enters and makes his way through each of the rooms.

In the end, Prospero dies after confronting this stranger, whose "costume" proves to contain nothing tangible inside of it. The guests, as one would expect, also died.


On the Homefront - Medford. Oregon
**No new deaths from the coronavirus as of today. The count still stands at 109. No new cases reported in Jackson Country where we live.

**Out of the ordinary visitor - I've been reading (and watching videos) about family members standing outside of nursing homes for the elderly trying to cheer them up and help keep them feeling connected to their world.

How about a Llama visitor? Here's a link to Caesar the No Drama Llama, visiting The Oaks at Sherwood Park care facility in Keizer.

I hope that suddenly seeing a live Llama outside their window doesn't freak out some residents and make them think dementia is knocking at their door!

Quote for the day; "The irony of life is that those who wear masks often tell us more truths than those with open faces." -Salvatore Laccona
at May 06, 2020