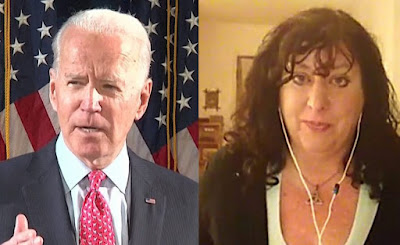 The way I see it, if I were a woman and a man stuck his hand up my dress in public (corridors of the Capital) I would have shouted out in anger!

But I'm a man. So, assuming a woman would let that happen and not report being sexually harassed because she was afraid to - or whatever reason - is a leap of faith. Still, I believe every woman should speak out if she's manhandled by some pig bastard.

The only thing I require, in order to make a reasonable judgement of a "He said, she said," argument is proof. For or against. I realize that's not always possible in situations like this so one has to try to understand the dynamic between the accused, and the accuser.

Going with what's already been reported two years ago (taped AP interviews), and recent reports, it's obvious Tara Reade (Biden's accuser) has changed her story numerous times. Which story should I believe?

It just came to light yesterday (after the AP released the tapes) that she never reported a sexual assault or harassment to anyone - in spite of an earlier report that she claimed to have gone to a Senate personnel office and filed a complaint.

I recall Reade telling the AP last year in an interview that Biden touched her on the shoulder and made her "uncomfortable."

So what happened this year that changed those original charges into a something a hell of a lot more serious?

Is it a coincidence that the Trump campaign and Republican puppets are busy making up lies about Biden, and just happened to seize on this questionable avenue in an effort to discredit Joe?

Here's the thing - we now know that Reade never filed a sexual assault complaint with any government agency. This story/lie was exposed yesterday by her own admission when confronted by an AP reporter. She attributing the latest change in her story to a suddenly faulty memory.

I suspected something was "rotten in Denmark" when the Republicans pounced on Biden for not revealing his records with the University of Delaware. They would not have found a thing about Reade, but they would have gained access to a treasure trove of sensitive notes on conversations with other lawmakers and world leaders that could be used to a political advantage.


Three things to consider
One - it's common for current Congressional members (and those who have not retired from political life) to have their records (in any university) closed until they retire. Ask Mike Pence who had his records closed in 2016 when he decided to be Trump's stooge.

Two - Universities DO NOT want personnel files. They are only interested in speeches made, and historical documentation on a lawmaker's life. They don't want dirty laundry. I say this because Trump's minions are acting like Biden is hiding something in the university files.

Three - It's a fact that member's personnel files can be found in the Senate and the National Archives files. It's also a fact that Biden asked both to search their records of any complaints made by Tara Reade.

In summary, the aspects of Reade's revolving stories suggest she's never been honest about being sexually assaulted by Biden. Her stories have changed over the years for reasons we may never know.

I think it's a hell of a reach not to suspect Republicans are behind Reade's sudden accusation of being sexually assaulted when Trump is trailing in the polls.

For the record, I don't believe in coincidences, especially if Trumpies are involved!

Here's an article by Michael. J. Stern, a columnist for USA Today, on the same subject of Reade's credibility. The author's work experience (and research) far exceeds my knowledge on the subject.

On The Homefront - Medford. Oregon
**Not much to report today.

**COVID states have barely changed since yesterday. I keep telling myself this must be good news. Perhaps Oregon has flattened the curve.

**I'm not sure if it's a good thing, but I've lost my taste for alcoholic beverages. Wine. Irish whiskey. Bourbon. Vodka. Tequila. Beer.

It's not like I've been a heavy drinker and my kidneys are praising me for suddenly stopping... it's just since I was stricken with loss of balance (3 weeks ago) and weakness all over my body, my taste buds are out of whack.

Now that I'm feeling better, I have no desire for booze. Don't ask me why. It's damn strange. Hopefully this new affliction will go away some day soon!

Quote for the Day; "There are people who have legitimate concerns about false accusations and the impact that can have on a person's life when they have been falsely accused. Kirsten Gillibrand and I are not unaware that it is an issue we need to be concerned about, and that's why we have made changes in the legislation to address not just the rights of the victim, the accuser, but also of the accused." -Former Senator Claire McCaskill
at May 03, 2020