Pandemic Diary Day 50: It Looks Like I May Become a Vegetarian... Whether I Like It, Or Not! 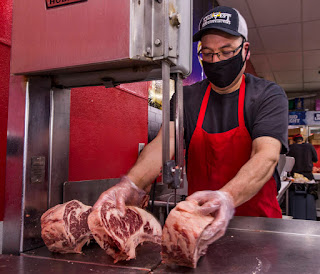 When I walked down to the little meat market less than a half a block away from our house a new reality hit me in the gut when the owner said they weren't taking any more orders right now!

Apparently there's been a rush on meat because of national headlines reporting a broken supply line in the country's major meat-packing plants.

In response, everyone in the Rogue Valley decided they had to stock up on meat the last few days! Our meat market was no exception. It had to stop taking orders yesterday, the demand was so high.

For six years, Shirley and I have patronized them because we wanted to support a family-owned operation (who were also our neighbors), and they also have the best meat in the county (a secret that seems to have slipped out recently).

Now I don't know when we'll be able to order meat from them again. The meat supply in local supermarkets is also quickly dwindling, and I read that Costco is limiting how much meat a person can buy right now. 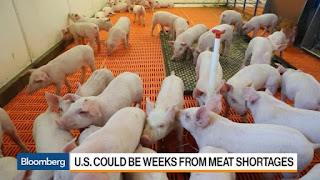 To be clear; I'm a meat-eater.

A man who enjoys bacon, a good steak, or hamburgers.

The idea that no meat may be available - even if for only a brief time - leaves me cold. Frozen with the prospect of being a vegetarian... whether I like it or not!

First it was toilet paper. Now, it's meat. I don't even want to think about what may be the next shortage because of the pandemic.

On a hunch, I may stock up on coffee. If I ever run out of my java fix there's no longer any reason to get out of bed in the morning! 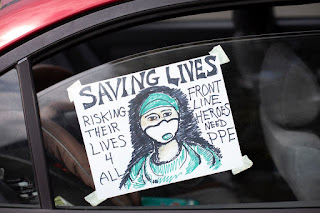 **COVID-19 hospitalizations have fallen to a new low since the state started reporting them.

**As of yesterday, the state has identified 2,680 Oregonians who have been infected with the virus and 109 people have died from it.

**Shirley and I have concluded this pandemic is going to be around for awhile - despite Trump's magical thinking - and have decided to stay-at-home for as long as it takes.

With the exception of a monthly supply run - food and prescriptions - we've settled into what may be the new normal for the rest of the year. We're thankful for a roof over our head, and the fact that we can purchase needed supplies. So many Americans can't these days.

Quote for the day; "Be thankful for your allotment in an imperfect world. Though better circumstances can be imagined, far worse are nearer misses than you probably care to realize." -Richelle E. Goodrich
at May 05, 2020