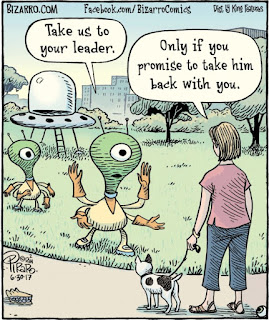 In another time, the news about the government admitting there's UFO's and even releasing videos shot by stunned American pilots, would DOMINATE the headlines for days (at the very least).

Trump sounded a bit in awe when the Pentagon made the startling announcement one month ago yesterday.

It was a fleeting moment of celebration for UFO hunters who have been marginalized for decades. An episode out of the X-Files where the government comes clean. Alien life enthusiasts were exonerated by fuzzy videos.

But the UFO story wasn't even the lead headline on April 7th. Or, the next day, or the next. It faded away in a spectacularly short time. Buried by Trump's Coronavirus Task Farce's infighting on facts.

No story can compete with a COVID-19 linked report. I get it. On one level. A pandemic of this magnitude only comes around every 100 years or so. On another lever, I don't see anything wrong with reporting ALL THE NEWS.

I wonder how many people are aware that the Senate Intelligence Committee finally released it's report on Russia's interference with the 2016 election? The committee concluded Russia not only interfered but that Trump and minions welcomed the help.

Just yesterday the House Intelligence Committee released transcripts from 57 of the committee's closed door hearings from the panel's two-year investigation.

There were revealing interviews with key members of the Trump team and the President's family, including Donald Trump Jr.; Jared Kushner, Corey Lewandowski, Hope Hicks, Brad Parsacle and Carter Page.

So why aren't the talking heads running with this big news? Instead, the Russia investigation results are playing second fiddle to Trump getting rid of the healthcare experts on his Coronavirus Task Farce.

All I'm saying is there's a lot of shit happening every day, both nationally and internationally, that needs a lot more exposure and attention by the mainstream media and cable news.

On the Homefront - Medford, Oregon
**The big news - Gov. Brown is opening up the state May 15th under a new coronavirus plan. That should be interesting as we've only done a minimum of testing.

**The mask controversy goes on - Gov. Brown says to wear a mask when we go out if we want to be considerate of others. Forgive my jocularity at this "suggestion" which most people will ignore.

Some businesses will be required to have employees wear face masks to reopen. Not all though. From Trump on down the vaguely enforced mask rules have been a mockery of safety.

**In related news Oregon health officials are saying the coronavirus antibody tests are too unreliable to analyze for public health purposes. In other words state officials are taking test results by not examining them! Truly pathetic.
at May 08, 2020