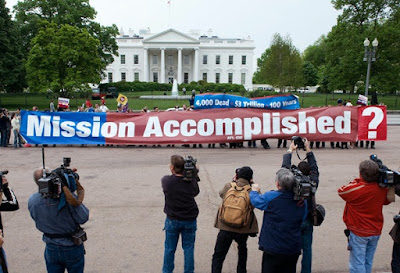 You can be excused for believing the worst of the Pandemic is over and everything will return to normal by Christmas if you watched Fox's Special Town Hall event featuring Trump and a Fox reporter last night sitting in front of the Lincoln Memorial.

In my mind's eye I can still see Dubya (on May 1st, 2003) declaring victory in Iraq aboard the USS Abraham Lincoln aircraft carrier with a giant sign behind him that read, "Mission Accomplished."

You may not remember, but Bush became the first sitting President to arrive in an arrested landing in a fixed-wing aircraft on an aircraft carrier. The plane, a Lockheed S-3 Viking, was dubbed Navy One as the aircraft carrier lay just off the San Diego coast.

It was a dramatic entrance that his critics never let him forget.

As history inconveniently points out the war in Iraq wasn't going so well and that in fact guerrilla warfare in Iraq was increasing. The vast majority of casualties, both military and civilian, happened after Bush's infamous claim.

Which brings me to Trump and last night's Town Hall on Fox. If I drank the same Kool aid that many Fox viewers enjoy, I would have been pumped up and ready to break every safety rule there was to LIBERATE AMERICA!

It was a moveable feast featuring Trump.

I was disappointed that Trump didn't make some kind of grand entrance - one that would have upstaged Dubya's - but he played his cheerleader role in true Trumpian fashion with a juicy selection of promises and lies designed to gin up his base.


Main talking point
If not for Trump's incredibly rapid response to the oncoming invisible enemy everyone in America would currently be sick, dying, or dead. Period. End of story.

On the economy
Only Trump can save every business, large and small, in the nation. Only Trump's policies will revive the economy, and by next year America will be richer and more powerful than every before. Period. End of story.

On the Homefront - Medford, Oregon
**Health officials reported 45 more infections yesterday raising the state total to 2,680. Yesterday was the first day since April 22 that the state has not reported any new deaths. The latest death toll is 109.

**Gov. Kate Brown extended the state of emergency stay-at-home order for 60 more days. It does allow her to terminate it earlier if deemed appropriate. 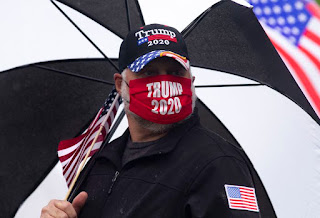 **A couple of hundred supporters protested the stay-at-home order in Salem this past weekend.

(Photo by Beth Nakamura for The Oregonian)

What stood out to me were the Trump supporters, alt-right members like the Proud Boys, and the right-wing militia members strutting around like stupid peacocks looking for trouble.

The protest was a snap shot of where we're at in America during a pandemic that is changing the way we live forever. No unity against a common enemy.

Quote for the day, "The destiny of Man is to unite, not to divide. If you keep on dividing you end up as a collection of monkeys throwing nuts at each other out of separate trees." -T.H. White
at May 04, 2020