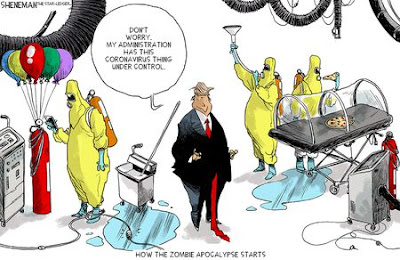 If there's one thing Trump hates above all else, it's the truth.

Simply because it's usually contrary to what he says and does. That's why Trump has decided to stifle Dr. Fauci's efforts at spreading the truth about the current state of the pandemic pounding our nation.

Dr. Fauci was supposed to testify before the House Appropriations Committee regarding the White House's COVID-19 response, but Judd Deere, a White House deputy press secretary claimed it was counter-productive to have members testifying right now...because they're so busy.

Apparently the same flawed logic doesn't hold true for the Senate, which has scheduled Dr. Fauci, and other administration officials, to testify before the Health, Education, Labor and Pensions Committee on May 12th.

The bottom line is Trump has had it with Dr. Fauci. His truth telling during press briefings has made Trump look stupid (well... even more stupid) and is a big part of why Trump's approvability ratings have sunk into a swamp of lies. 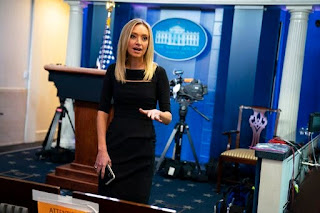 A new star in the Trump universe is born!

For the first time in over a year (417 days), there was a press secretary giving an official White House briefing.

The first thing Kayleigh McEnany promised the assembled press was, "I will never lie to you."

The next thing she did...was lie. I'm sure Trump had to be proud of his new propaganda puppet who bobbed and weaved with the truth like an experienced boxer.

McEnany artfully dodged questions by misquoting an FBI agent's handwritten note about former national security advisor Michael Flynn, claiming he was the victim of a conspiracy.

She lied about Trump's tweets regarding Michigan protesters by suggesting he was talking about all Americans having a First Amendment right to protest. Actually, he was defending the armed militia members crowding into the State House in an attempt to intimidate lawmakers.

I think my favorite overt lie was when McEnany said Trump was in agreement with the intelligence community assessment that, "The COVID-19 was not manmade or genetically modified."

In true Trumpian fashion McEnany defended Trump's statement that there was proof the coronavirus was developed in a Wuhan laboratory, without blinking an eye.

Her ability to flip from fact to fiction must have had Trump applauding as he watched his new minion lie her ass off in her first appearance before the press.

On the Homefront - Medford, Oregon
**Rain today - we certainly need it. I recently read a report on how Oregon is part of an ever increasing drought zone on the West Coast.

**Current COVID-19 stats - There was another death last night bring the total to 104 cases in the state. The known cases climbed to 2,579 as of today.

**I'm finding out that there's no end to projects inside and outside the house. My beautiful brown-eyed wife is making that point every time we complete a "project," and another is magically waiting impatiently for it's turn!

I know that it's important to stay busy as we're cooped up, but my idea of staying busy parts somewhat from Shirley's thoughts on the subject.

As a candidate for the laziest man in the world, this sudden surge of honey-does is harshing my high!

Quote for the day; "The liar's punishment is, not in the least that he is not believed, but that he cannot believe anyone else." -George Bernard Shaw
at May 02, 2020